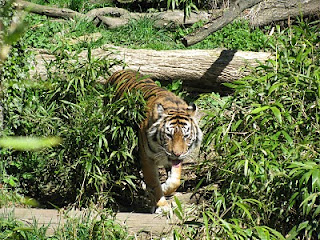 Happy Year of the Golden Tiger!

I had a party for Chinese New Year's Eve that was much bigger than I expected. I cooked and served as many of the Chinese lucky foods as I could to ensure that this year would bring more wealth, health and happiness. Most of the lucky foods are either the color of wealth such as gold (including orange) or silver or look like a lucky object such as potstickers that resemble ancient Ming Dynasty ingots, or they sound like lucky Chinese words. I'm half Chinese and I just can't seem to get away from these beliefs and I figure it is better to be safe than sorry as the Tiger year isn't an easy one for me. The lucky foods I incorporated in my menu included:

The only thing I didn't include was a whole fish and I still feel guilty about it, but I shopped too early for it to stay fresh and ran out of time to go and get one before the party. Next year I have promised myself that I will include it. What I did make was:

I put out bowls of Chinese peanuts and watermelon seeds and also passed around Fortune Cookies at the end of the evening. 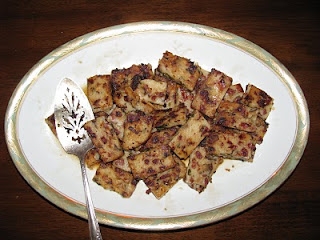 Put shredded Radish in a small pot and add water. Cook over low heat for 45 minutes or until very tender. Stir in 1 Tablespoon of Vegetable Oil. Take off stove and cool slightly. In frying pan, heat remaining 2 Tablespoons of Vegetable Oil, put in the Green Onions, Chinese Sausage and Shitake Mushrooms. Stir fry for 2 minutes and add to the Radishes in the pot. Stir in the Rice Flour and season with Salt and Pepper. Put into an oiled 8 x 8 inch glass baking dish and set above a wok filled with several inches of Water. Cover the pan with aluminum foil and bring the Water to a boil. Turn the heat down and steam for 1 hour. Take out and let cool completely.

To serve, remove the entire Radish Cake from the pan and slice into 1/4" by 2" slices. Heat a frying pan with 1 Tablespoon of Vegetable Oil and fry each slice until browned on one side and then turn to brown the other side. Remove to a plate when done. Add in more Oil, if necessary for each batch until all the Radish Cake slices are browned. Mix the Oyster Sauce with the hot Water and drizzle over the Radish slices. Sprinkle with Sesame Seeds and Cilantro before serving.

As for the Five Elements of this dish, the Rice Flour is part of the Metal Element and so are the Scallions. The Chinese Sausage is made of Pork, which belongs to the Water Element and so does the Oyster Sauce and Sesame Seeds. The Cilantro, as a leafy green herb, is part of the Wood Element and the Mushrooms are the Earth Element, as is the sticky texture of the cake. The sweetness of the Chinese Sausage also emphasizes this element. The only element missing is the Fire Element so it is suggested that you serve it with something spicy hot with Chilis.