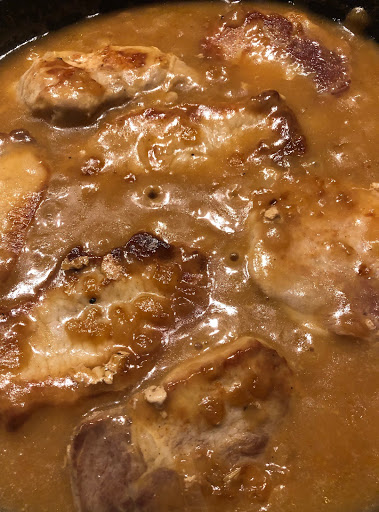 After celebrating Thanksgiving with a Chinese version, I was still craving some Dressing, which has always been my favorite part of the meal. But I didn't have any Turkey, so instead I made Smothered Pork Chops. For those of you who've never had this dish, it is a Southern specialty where Pork Chops are pan fried and then covered (smothered) in a rich Onion Gravy. And, I need Gravy on my Dressing. I made a combination of the Bread Dressing and Cornbread Dressing (previous posts).
I haven't made Smothered Pork Chops in years and I don't know why. This was one of my Father's favorite ways to eat Pork Chops although usually he wanted Mashed Potatoes as the side dish and it would be good with Noodles too. It's comfort food for sure, but quite easy to make. All you do is fry Pork Chops on each side for about 4 minutes if you are using 1" thick Pork Chops  It takes less time for thinner Pork Chops. I like to use Boneless Pork Chops because it's awfully messy when there's a bone. Then take them out and then sauté some Onion pieces in Butter until they are lightly caramelized. Then you use Sticky Rice Flour and Broth to make the Gravy. Be sure to season it with some Pepper for an authentic taste. Then you add the Pork Chops in and cook for another 15 minutes and that's it. I'm definitely going to remember to make this more often as it's just so good!
Smothered Pork Chops with Gluten Free Onion Gravy
4 - 1" thick boneless Pork Chops
Salt for seasoning the Pork Chops
2 Tablespoons Vegetable Oil (I used Safflower)
3 Tablespoons Butter
1/2 large Onion chopped (about 1/2 cup)
4 Tablespoons Sticky Rice Flour (also called Glutinous Rice Flour or Mochi)
2 1/2 cups Chicken Broth
a pinch of fresh ground Pepper
Pat the Pork Chops dry with paper towels. Then season both sides lightly with Salt. Then heat the Oil in a large frying pan. Add in the Pork Chops and cook for 4 minutes, turn and cook for an additional 4 minutes (cook for only 3 minutes if using thinner Pork Chops. Remove for the pan and put on a plate.
Put the Butter in the pan and add in the Onions. Cook over medium heat, stirring often until they are light golden brown. Then add in the Rice Flour, stirring to combine and then add in the Chicken Broth and Pepper. Whisk it all together and cook until the Gravy thickens. If you'd like the Gravy to be thinner, add a little bit of hot Water or more Broth. Add the Pork Chops back in to the pan and turn the heat down to a high simmer. Cook for 15 minutes and then serve over Dressing, Mashed Potatoes or Noodles.
Five Element Analysis
Pork belongs to the Water Element and Chicken Broth brings in the Wood Element. The Rice Flour, Butter and Onions contribute the Metal Element and because you caramelize the Onions, it also adds Earth. Gravy is also a very Earthy food because of its texture too. The Pepper brings in only a little bit of the Fire Element, so be sure to serve it with a Fire food side dish to create balance along with the Starch of your choice.
Posted by Lillian at 7:04 PM