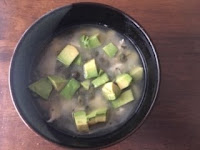 I visited Colombia years ago and had such a wonderful time and I loved the food!  My favorite thing was Ajiaco - a rustic Colombian Chicken, Potato and Corn Soup. I had it many times and it was always delicious!  I did ask my hosts how to make it and I got a recipe but I was stymied by my inability to get Guascas - the herb that flavors the soup or Criollas Potatoes, which makes the broth thick and creamy. So, I put off making it all this time. Recently, I was cleaning out a stored box and I found the recipe. Of course like many recipes from home cooks, it doesnt give precise measurements.

So, my first task was to find Guascas and I found it at a local Latin Market. If you can't find Guascas, use an extra Bay Leaf. Then I needed to find a substitute for Criollos Potatoes as I wasn't interested in canned ones, but I had a brainstorm that I could create a creamy broth with a Russet Potato and then cut up other Potatoes like Yukon Gold and Red Bliss for the Potato Chunks. I also wanted to make the soup a little easier to eat. So, I used Corn Kernels instead of slices of Corn on the Cob. And, I wanted to make it faster so I used Chicken Broth and bite sized pieces of Chicken Breast cooked only for the last 15 minutes.  I served it the traditional way with Capers, cut up pieces of Avocado and Sour Cream for those who wanted it. I remember that it was served with a kind of Salsa that contained Aji Chilis that I didn't make, but it might be really good to add in a little hot sauce too. it was so delicious and it immediately transported me back to Bogota. I love this soup!


Place Chicken Broth in a pot and add the Onions, Garlic, Russet Potatoes, Bay Leaf and Guascas. Bring to a boil and reduce to a simmer and oook for 20 minutes. Remove the Bay Leaf and use a Potato Masher to mash the Potato. Taste and add Salt if desired. Then add in the Chicken, the remaining Potatoes and the Corn and bring back to a boil. Cook for an additional 15 minutes.  Serve with Capers, cut up Avocado and Sour Cream, if desired.

As a soup, this automatically belongs somewhat to the Water Element, but the Potatoes and Corn make this a very Earthy Soup. The Chicken Broth and Chicken bring in the Wood Element and the Capers and add even more. The Gauscas, Bay Leaf and Sour Cream contribute the Wood Element and the Avocado (Haas) contributes the Water Element .Only the Fire Element is missing, so sprinkle on some hot sauce or serve this with a green, leafy Salad to create a balanced meal.