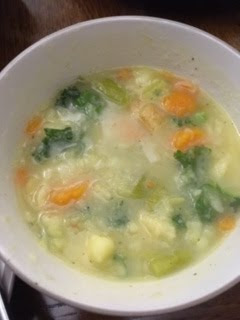 I was teaching my Master Face Reading Certification Program in Bath, England last week and we were staying in an AirBnb because I prefer cooking most nights to going out for so many meals. It was really cold so that meant I needed to make some soup. I gathered together various vegetables we had bought and created a Creamy Vegetable Soup that was comfort food in a bowl!  With a side of English Bacon, a Green Salad and toasted and buttered GF Bread from Marks and Spencer, it was the perfect meal!  I used Chicken Broth made with Bouillon for the base along with Potatoes and Shallots. I cooked them until they were soft and mashed them with a Potato Masher. Then I added in Carrot and Parsnip and cooked them until they were just softened and finally, just before serving, I tossed in some cut up Kale. This Creamy Vegetable Soup was wonderful!

Heat the Butter in the bottom of a soup pot. Add in the Shallots and cook until soft. Then add in the Potatoes and cook until they become coated in butter and become slightly more translucent. Then add in the Water and the Bouillon Cubes. Bring to a boil and return to a simmer, cooking for 20 minutes. Use a Potato Masher and was the Potatoes as much as you can. Turn heat higher and return to a boil. This is the time to add more Water if you like a thinner soup. Add in the Carrots and Parsnips and turn down again to a simmer. Cook for an additional 15 minutes. Then throw in the Kale, stir and cook for an additional 5 minutes. Sprinkle with Pepper, if desired and serve.

As there are so many Root Vegetables in this soup, you know it has to belong primarily to the Earth Element. However, Soups of any kind are considered a Water Food as well, although this one is very thick  The Kale adds the Wood Element and the Shallot and Butter contribute the Metal Element. Only the Fire Element is a bit deficient as it is only represented by a sprinkling of Pepper so add a Green Salad with Cherry Tomatoes. I also enhanced the Water Element with Bacon and the Metal Element with Rice Flour based Bread to balance out the Elements.