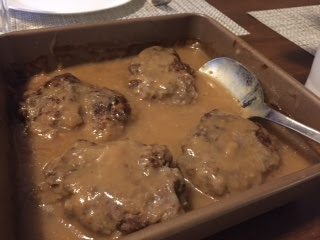 Remember TV Dinners? I used to have to eat them when my parents went out and we had a babysitter.  The only one I could stand was Salisbury Steak, usually served with mashed potatoes and mixed vegetables. For some reason, I really like gravy and it can clearly cover up a multitude of flaws in a dish. Then one day when I was a few years past needing a babysitter, I was reading a cookbook (I read them for fun then and now), and I discovered a recipe for Salisbury Steak that I just had to make. I remember it being so good that my Father asked me to make it again and I was so  proud of myself for making another dish that he liked!  I've made it many times after that but it's been such a long time since I made it. I was telling my son about it the other day, so we made it. He thought it was like the Hawaiian plate lunch Loco Moco, minus the Rice, the fried Egg and Macaroni Salad. Add those and it will be pretty authentic, as well as being Gluten Free! My son declared it delicious and this dish will now be back in the rotation after a very long break. It's definitely comfort food!

Mix together the Ground Beef, Seasoned Salt, Worcestershire and Tamari along with the Egg, Bread Crumbs and 1/3 cup of grated Onion with your hands until fully mixed.  Shape into 4 oval Salisbury Steak Patties.

Heat a large frying pan on medium high heat and add in the Oil to coat the bottom of the pan. Then place the Salisbury Steak patties on the pan and cook on one side until browned and turn over and cook until browned on the other side (they will still be very pink in the middle). Remove and place in a  8 or 9 inch square baking pan.

Turn down the heat to medium and add the Butter and put in the 2/3 cup of grated Onion. Cook until Onion gets soft and caramelized, about 5 minutes, being sure to scrape up all the browned bits. Then sprinkle on the Rice Flour and stir in - it will clump. Then add the Beef Broth smooth out the lumps and cook until the sauce has thickened and made a thin gravy.

Pour the Gravy over the Patties and cover the pan with aluminum foil. Bake for one hour. Serve with Potatoes, Noodles or Rice a Fried Egg and Macaroni Salad if you want it to become Loco Moco.

This recipe is very Earthy as Beef and Beef Broth are both from the Earth Element and if you serve it with Potatoes, it gets even Earthier. The Worcestershire Sauce, Tamari and Egg contribute the Water Element.  The Onion, Rice Flour (or Rice if you serve it) and the Gluten Free Bread Crumbs (made mostly out of Rice Flour) and the Butter add the Metal Element.  The Fire Element is missing so it would be good to serve this dish with a Lettuce Salad with Tomatoes and also be sure to add some the Wood Element to the meal by also serving a green vegetable like Green Beans or Broccoli too to create a Five Element balance!