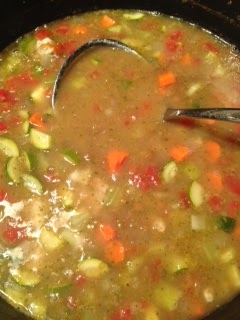 Now that I am back in a soup mood, I've been thinking about how to make old standards a little differently. Last night, I decided to make Lentil Soup, but instead of using dried lentils, I used canned Lentils. One of the reasons why is that I was reading about FODMAPs and canned Lentils are supposed to be a lot easier on the digestion. After making and eating this soup, I have to agree! I used 2 cans of Lentils and made a broth of Chicken Broth and the usual Onions, Garlic, Carrots and Celery along with some Zucchini. I also added a can of whole Tomatoes already flavored with Basil. I left out the Tomato Sauce as I wanted the broth to be clearer, but of course it can be added in too.  It turned out to be a delicious version of Lentil Soup! Using canned Lentils made more broth and it less thick and I think I may prefer it this way.  I made little mini meatballs out of Italian Sausage and the whole thing was done after only 30 minutes cooking time. So this soup is delicious and fast!

In a large soup pot, put in the Olive Oil and the Onions and Garlic and cook until Onions are translucent.  Add in the Carrots, Celery and Zucchini and cook until the vegetables soften slightly. Add in the Lentils, the Chicken Broth, the Water and the chopped Tomatoes. Bring to a boil and return to a simmer. Cook for 20 minutes and add Salt and Pepper to taste. Then take the Italian Sausage and remove from the casings. Take a teaspoonful of Sausage and roll into a little ball. Drop into the soup and bring it back to a boil and reduce heat. Cook for 10 minutes and serve.

As a soup, this is already part of the Water Element and the Italian Sausage, made of Pork adds even more Water.  Chicken Broth and Celery contribute the Wood Element. The Tomatoes add the Fire Element and the Lentils and Zucchini make sure that the Earth Element is present. The Garlic, Onions and Basil bring in Metal Element. So this then, is a balanced Five Element soup!