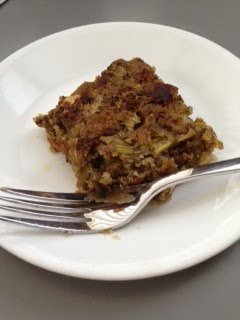 I know we still have a month to go before my favorite holiday of the Year - Thanksgiving. But, I've had a request for my Gluten Free Thanksgiving Dressing made with Bread and Sausage, so here it is. I change each year and make the Cornbread Dressing (previous post) one year and this one the other. I used to use this recipe as a Stuffing, but I've long abandoned that idea as it is hard to get it to cook thoroughly inside a bird and I love having a crispy crust. So now I make it in a baking dish, so it has to be called "Dressing". This is a classic recipe that I got from my former Grandmother-in-law who used Hamburger or Hotdog buns as the bread she used to make croutons. Now that I'm completely Gluten Free, I've updated her recipe and use a Gluten Free White Bread instead.

The only difficult part about making this dressing is actually remembering to make the croutons ahead of time. Basically, you cut the bread into little pieces and then toast them in a low temperature oven until they are dry and very lightly browned. They can be stored for several days before you need to use them as long as they are completely dried out.

Then when it is time to make the dressing, the smell of the Onions, Celery and Sausage sizzling in the pan on Thanksgiving morning is the best smell of the day for me. You can make this Dressing Vegetarian by leaving out the Sausage, but I think the Cornbread Dressing is better as a Vegetarian version than this one.

Once the Vegetables are tender and the Sausage is no longer pink, it is added to the Bread Cubes along with the Poultry Seasoning and Chicken Broth. I like a lot of Poultry Seasoning but you can also use Ground Sage. You then mash it together and then bake it in the oven until it is crisp and golden brown on top. If you like your Dressing more bread-like, you can add two eggs to the mixture, but I never do. One of the more unusual ways to cook it is to put it into Cupcake tins to make individual servings, but I am a traditionalist and like to bake it all together and serve it in squares and my favorite way is in a cast iron pan that I serve it in.

Dressing is the best part of Thanksgiving for me although you don't have to serve this just once a year. It's also really good as a Stuffing for Pork Chops.

Heat the oven to 200 degrees.  Place bread cubes on a large baking sheet and toast, tossing every 15 minutes until lightly browned. This step can be done ahead and bread cubes can be stored in Ziploc Bags until ready to use.

In a large frying pan, melt the butter and then add the Onions, Celery and Sausage. Cook until the Sausage is no longer pink and the Celery and Onion are soft.  Pour into a large mixing bowl and add the Toasted Bread Cubes, the Poultry Seasoning, Chicken Broth and the Salt.  Mash up the bread with a large wooden spoons (or your hands). Dressing should be able to form a soft ball when pressed together. If it is too dry, add more chicken broth. Add the broth in small amounts as you don't want it to be too wet. If you are using eggs, add them now and mix thoroughly.

Place in a buttered baking dish (I like to use a square one). Sprinkle the top with a little more more Poultry seasoning and place in the oven. Cook for 45 minutes or until the top is lightly browned. If using a cast iron pan, it may take up to 1 hour. This dressing can be reheated in a low temperature oven (200 degrees). Or the next day, it can be reheated as individual pieces in a frying pan.

The bread is made primarily of Rice Flour so it actually belongs to the Metal Element and the Onions and Poultry Seasoning add even more Metal. The Pork Sausage contributes the Water Element and the Chicken Broth and Celery bring in the Wood Element. Both the Fire and Earth Elements are missing, which is why this is such a good side in a larger meal, like Thanksgiving,  where there are Sweet Potatoes, Mashed Potatoes or Pumpkin Pie  from the Earth Element and Cranberries from the Fire Element to create a balanced Five Element meal!