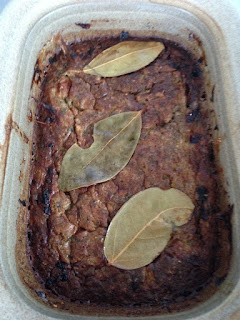 I've been meaning to post this recipe for several weeks now - ever since I got the recipe from my Mother in Law. This is simply the best Chicken Liver Pate ever!  My friend Kelly says it is the only one she has ever been able to eat and enjoy because doesn't taste like liver. To her, it is reminiscent of Thanksgiving stuffing with giblets. I personally love Pate - preferably French, but this one is now my all time favor. This Pate is always a huge hit at family parties. I recently brought one to my class to serve at break and it was completely devoured in 15 minutes - it's that good!  It's one of those recipes that you have the urge to keep secret but I feel like this is one that I have to share.

Preheat oven to 350 degrees.  Blend the Liver with onion in the food processor to a coarse blend. Melt the butter in frying pan, put the Cream in and stir in the Chicken Livers and Onion mixture with the Oat Flour, Egg, Thyme, Basil, Salt and Pepper. Blend well.

Put in 3 small aluminum trays or one Casserole dish. Garnish with Bay Leaves on top
Place trays or Casserole dish in a larger baking pan and fill the larger pan with Boiling Water bath halfway up.  Bake the small trays for about 45 minutes or the Casserole for about 60 minutes. Use a skewer to test doneness. The skewer will show moistness but not a sticky residue and that's how you know it is done. Cook for 5 minutes longer if necessary. Remove from oven and serve warm or refrigerate to serve later cold with Crackers or Bread.

Chicken Livers belong to the Wood Element so this is primarily a Wood food. The Cream, Red Onion, Basil, Thyme and Bay Leaves add in the Metal Element. The Oat Flour makes sure that the Earth Element has a little representation and the Egg brings in the Water Element. Only the Fire Element is missing (except for the trace amount of Pepper), which can certainly be added with a good cup of Tea along with the Crackers and Bread that bring in even more of the Wood Element. So, serving this with another appetizer containing Tomatoes or Red Peppers would also be a good idea to create a balanced Five Element Appetizer Spread.