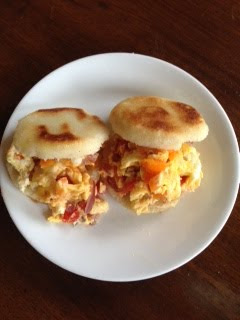 I am currently in love with Arepas. For those of you who have never had them, you must try them!  They are a kind of flatbread that is a staple food in Venezuela and also in Colombia. I think they taste like grits made into bread!  Since I was raised on grits, that's a really good thing. They are probably most similar to Gorditas from Mexico or Pupusas from El Salvador, but are made from precooked cornmeal instead of Masa. I buy the P.A.N. brand from a Latin American store at Pike Place Market. They are extremely easy to make and naturally gluten free.


Arepas  are made to be sliced in half and filled with any number of fillings. The most classic fillings are with Eggs scrambled with Onions, Peppers and Tomatoes known as Perico (recipe below) or Reina Pepiada or Chicken Salad made with Avocados and Onion.  I use them to eat Ropa Vieja (a previous post) and I think they make a delightful replacement for English Muffins and I also like to eat them like an Egg McMuffin filled with a fried Egg with Sausage or Bacon. They are also good with just butter and/or jam and some people love to fill them with cheese. Anyway you serve them, they are delicious! 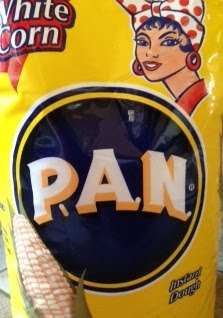 In a large bowl, mix together the P.A.N. Cornmeal with the water and salt. Let rest for a minute until it thickens. Then knead it slightly with your hands. Divide the dough into eight pieces and then roll each piece into a ball and press it down in your palms until it forms a circle about 1/2 inch thick.  Continue with the other pieces of dough.  Then heat a Cast Iron Skillet and pour on 1 Tablespoon of Oil.  Add four of the Arepas and cook until one side becomes golden brown - about 3 minutes.  Turn over and cook the other side until it also becomes golden brown. Remove to a plate and cool slightly. Place in a warm oven (250) degrees until ready to serve.  Repeat with the remaining 4 Arepas. When ready to serve them, slice in half with a serrated knife and fill as desired. Arepas can be reheated in a toaster as long as they have not been cut.

In a frying pan, melt the butter. Add in the Onion and Bell Pepper. Stir and cook until the onion is wilted. Add in the Tomato and cook for an additional one minute.  Pour egg mixture over and fold the vegetables into the eggs. Start to pull the egg back from the sides and let the runny part of the egg mixture fill in. Let cook until the bottom of the eggs just begins to set and then turn over in pieces. Break the pieces into smaller pieces and put onto a serving plate. It will look like you are undercooking the egg but they will continue to cook for a few minutes after.  Serve as a filling for Arepas and add hot sauce or salsa as desired.

Cornmeal belongs to the Earth Element so that element is covered. The eggs contribute the Water Element, the Onion adds the Metal Element and the Bell Pepper and Tomato bring in the Fire Element. Only the Wood Element is missing so serve this with something sour, like pickles or citrus, like Orange or Pineapple Juice to create a Five Element balance.