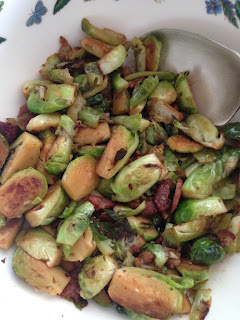 I forgot to post this recipe last month while visiting my friend Kelly, but I liked it so much that I wanted to share it with you. This is a simple dish that makes Brussels Sprouts taste amazing and I liked it so much that I am going to serve it for Thanksgiving. It's a sauté of Bacon and Brussels Sprouts cooked together and then steam-fried briefly with Chicken Broth and sprinkled with pepper. Kelly used a package of Bacon pieces from Trader Joe's that was quite lean so she actually had to add some Olive Oil to make the sauté work.  The Bacon and Chicken Broth combination make the Brussels Sprouts more savory than usual and take away that boiled cabbage taste and smell that bothers so many people. It is a delicious dish and could make almost anyone a Brussels Sprout lover!

Put Bacon pieces in a large frying pan and cook until the fat starts to render.  Add Olive Oil if  the Bacon is lean. Then add in Brussels Sprouts and Saute until they just start to brown, stirring frequently. Pour in the Chicken Broth and cook on high heat until the Chicken Broth nearly evaporates, stirring often.  Sprinkle with fresh Ground Pepper and serve.

Brussels Sprouts are a combination of the Wood Element because they grow on stalks and also the Earth Element because they are like miniature Cabbages and quite sweet when cooked. The Bacon adds in the Water Element and the Chicken Broth contributes more of the Wood Element.  The Pepper brings in just a hint of the Fire Element. This is not a balanced dish by itself and would be best served with a meal that brings in foods from the Metal Element and from the Fire Element to create balance.