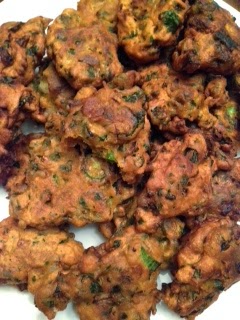 I found a wonderful Indian grocery store today with lots of wonderful vegetables and spices and they had lots of fresh Okra and I also picked up some Chickpea Flour called Besan.  So I decided to make one of my favorite Indian Restaurant appetizers - Pakoras. I have been holding onto a recipe that was given to me by an Indian friend that I've really been wanting to try.  Pakoras are Indian fritters and usually contain a variety of vegetables although I usually see potato and onions in most of them. I decided to add in Okra along with the onions and also tossed in some minced Serrano Chili and Cilantro.  My friend's recipe was very simple, so I added some more spices. I fried them up and served them with Tamarind and Tomato Chutney. They tasted like a cross between Onion Rings and fried Okra - both of which I loved.  They were incredibly good!  And, they were very easy to make. As an added benefit, they are also Gluten Free.  If you are a fan of the Pakoras served at Indian buffets, try making the at home instead.  I'll be making these again and again....

In a large bowl, mix together the Chickpea Flour, Salt, Cayenne Pepper, Asafoetida and Baking Powder. Stir to mix well.  Add 1/2 cup water and stir to make a thick batter.  Add up to an additional 1/4 cup.  Add in the Okra, Onions, minced Chiles and Cilantro in a big bowl. Let sit for 20 minutes.

Turn oven to 250 degrees and line a baking sheet with paper towels. Then heat up a Wok and put in oil to reach 2 - 3 inches.  When oil is hot, drop in about 4 fritters - approximately 2 teaspoonfuls of mixture each and fry until dark golden brown on both sides.  Put on paper towels in the oven and do the next batch adding them to the baking sheet until all are done. Serve hot with Tamarind and Tomato Chutney.

Chickpeas are a bean so they belong to the Water Element. The Okra contributes the Earth Element and is a mucilaginous food that is very good for the digestion.  The Onions add in the Metal Element and the Cumin and the resinous Asafoetida add even more.  The Cayenne Pepper, the Serrano Chili and the Tomato Chutney bring in the Fire Element and the sourness of the Tamarind brings in the Wood Element.  This then becomes a balanced little snack!