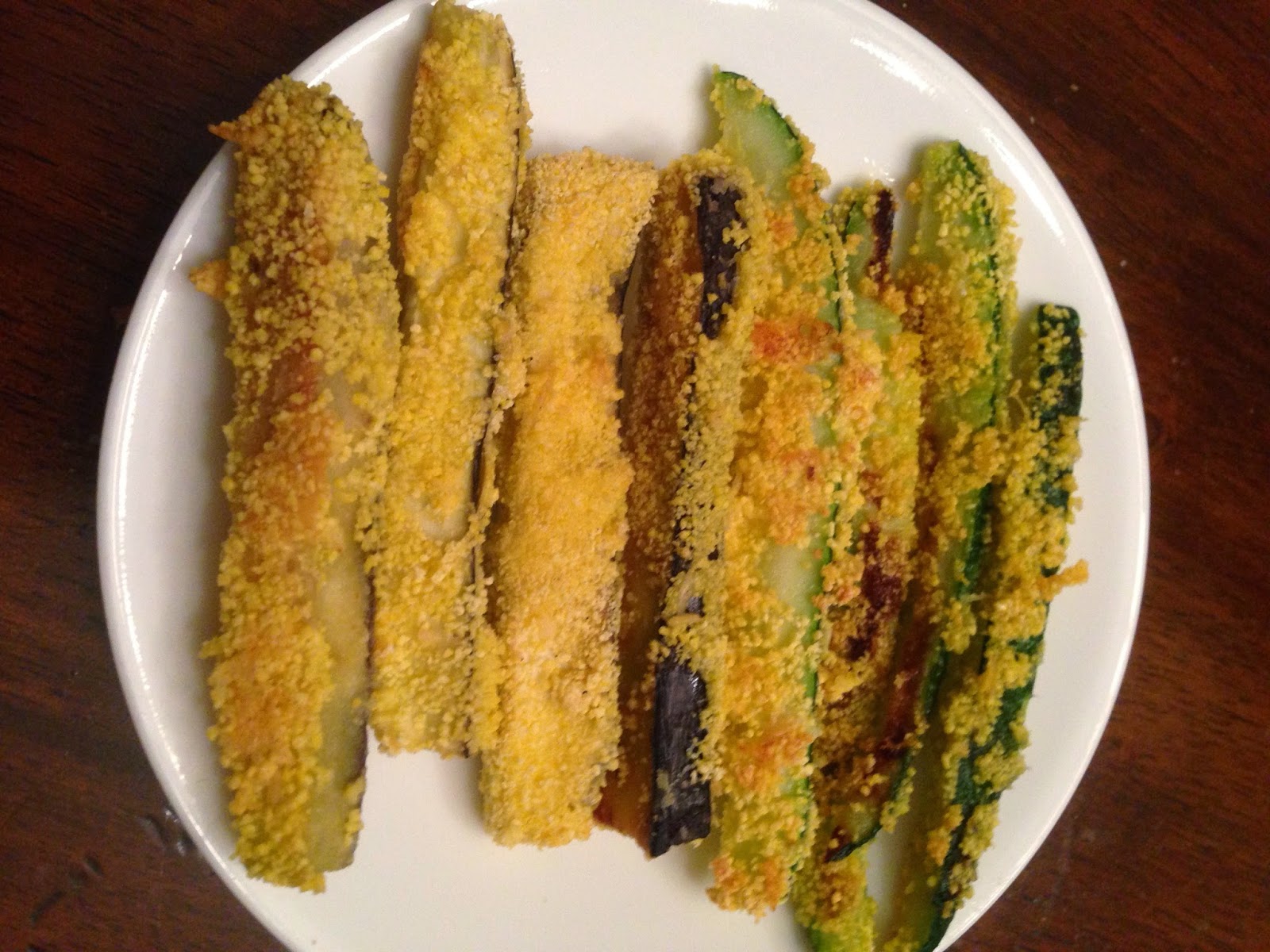 I had some amazing Eggplant Fries in San Diego a few months ago and I really loved them. I've been thinking about making some ever since, but I wanted to make them Gluten Free. There has been a package of Glutino Bread Crumbs languishing in the pantry waiting to be used and I have various Gluten Free Flours, so I ended up using the King Arthur brand of flour to coat the cut up slices of Eggplant and Zucchini, then dipping them in egg and then coating them in Glutino Bread Crumbs mixed with Parmesan Cheese. Of course you could use All Purpose Flour and regular bread crumbs instead. Once coated, I put them in an oiled baking pan and drizzled olive oil on top. I popped them into a hot oven and in 10 minutes they were browned on one side and I turned them over and they only took another 5 minutes to crisp up. They were crispy on the outside and soft on the inside and simply delicious!  I heated up some Ariabiata Sauce from Trader Joe's to use as the dipping sauce and was happy with my healthy vegetable fries. My son used Ranch Dressing as his dip and my husband made some Pesto Mayo - mostly Pesto - for his. They were so good that you might want to try making them too.

Cut eggplant lengthwise into 3/4 inch slices and then into 1/2 slices - then cut in half.  Cut zucchini into quarters.  Slice off a small portion of the seeds and then cut each piece in half or thirds (like thick-cut french fries).

Mix together the Bread Crumbs, Seasoned Salt, Garlic Powder and Parmesan Cheese in a wide bowl or plate with sides.  Put flour on another plate and eggs in a  wide bowl.

Then dredge eggplant and zucchini in flour, then egg, then bread crumbs and place on the baking sheet until all are done.  Place in the oven and cook for for 10 minutes.  Take pan out of the oven and turn the fries with a spatula.  Cook for an additional 5 - 10 minutes or until golden brown.  Serve with dipping sauces.

Eggplant is a Water Food and so are the eggs so that element is covered. The Zucchini is an Earth Food.  The Glutino Bread Crumbs were made of Corn, another Earth Food and the Gluten Free Flour, made primarily of rice makes it a Metal Food. If you are using regular flour and breadcrumbs, you are using foods from the Wood Element. The Marinara Sauce adds the Fire Element, the Ranch Dressing adds the Metal Element from the milk and spices and the Pesto adds the Metal and Wood Elements. So these fries, with all the sauces end up becoming a rather balanced snack!