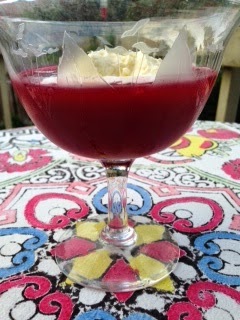 I just got married and we had a reception with both Danish and Asian foods. Later that night, we realized that we had forgotten to make one of the desserts! So I made it today instead in my quest to master Danish food.  This is a rather thin pudding, full of fresh berry flavor that is eaten with cream. To me, it is more of a soup and it is a rather unusual dessert, but I have fallen in love with it. The problem is that I can't say it as it is one of the hardest phrases in Danish - Rødgrød med fløde.

What looks like an o with a line through it is pronounced as if is an o and an e together. And, the d is not pronounced like it is in English - instead it sounds like a cross between a th and an l. This phrase was supposedly once used by Danish border guards to determine whether someone was truly Danish as it is quite difficult to say properly!  The good news is that it is also a delicious dessert made with assorted berries lightly cooked with a little sugar and cornstarch and served with a dollop of whipped cream. So even though I can't say it well, I can now make it.

This is a dish that uses up the abundance of summer berries and can also be made with frozen ones too.  Make this dessert ahead of time because it needs to chill and try serving it in a Martini glass or other decorative glass bowl, because it is a really beautiful dessert too.

Wash berries and put them in a medium sized pot.  Add sugar and water and cook for about 15 minutes.  Strain through a fine meshed sieve.  Return to the pot and add in cornstarch. Cook, whisking constantly until it becomes thick - about 8 minutes.  Pour into a bowl and cover with plastic wrap - be sure to push it down onto the surface so it won't create a skin.  Chill for at least one hour.  Scoop into glass serving dishes, glasses or bowls and top with a dollop of Whipped Cream.

Well, the name of this dish "Red Berry" tells you exactly what element is dominant - the Fire Element. Strawberries and Raspberries even look like little hearts. But I also added in some Blackberries and Blueberries because they contribute the Water Element. The Metal Element enters in with the cream and the Earth Element is represented by the sugar and cornstarch. Plus it is a dessert and the texture is thick and creamy. Only the Wood Element is missing.  So, serve it with a meal that includes some green vegetables and you will find a Five Element balance.