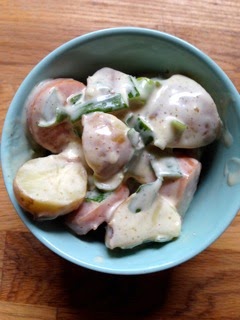 We had a barbecue the other night and cooked way too much for the number of people there.  There were a lot of grilled sausages left over  And, here in Denmark, people are crazy about their new potatoes. They eat them very simply - they boil them and add butter and salt.  Anyway, we ended up with a lot of those left over too.  So, the next day, I decided to pull up my German ancestry and created a Sausage and Potato Salad that I brought for lunch to the class I was teaching. It was a big hit!  It's a simple salad that tastes strongly of mustard, which works so well with the sausages.  It's also such a great hearty salad for a filling lunch. I served mine with a baby lettuce salad with lots of fresh tomatoes and a light vinaigrette. I love finding ways to use leftovers, but if you like this salad, you can also make it from scratch by boiling the potatoes first and cutting up sausages and browning them in a frying pan before mixing them into a salad.  It tastes better after sitting for a few hours as it brings the flavors together and I think it is even better the next day.

In a small bowl, mix together the mayonnaise, mustard, vinegar, sugar, salt and pepper.  Adjust seasonings to taste - it should taste strongly of mustard.

In a large bowl, place the potatoes, green onion and sausages.  Pour over the sauce and toss to coat.  Refrigerate to let the flavors meld for several hours or overnight for the best flavor.

Potatoes are an Earthy Food so that element is fully represented. The sausages, being made of pork, contribute the Water Element. The Mayonnaise, Mustard and Green Onions contribute the Metal Element and also the Wood Element because the Mustard and Green Onions also have Wood food properties.  The vinegar adds even more wood.  Only the Fire Element is missing so serve this with a big lettuce salad with tomatoes like I did to create a Five Element balance.