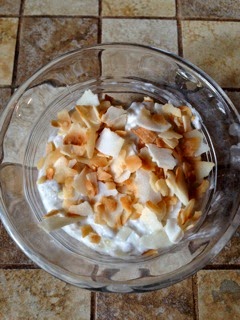 I went to a restaurant called True Foods in Santa Monica the other day with my friend Kim and was blown away by their Chia Pudding made with Coconut Milk, Bananas and of course those strange little seeds.  For those of you who don't know about Chia Seeds, yes they are the seeds that make Chia pets have that grassy fur, but in their dormant state, they are incredibly good for your intestines. They are one of the members of the Mucilaginous food group because they absorb a lot of liquid and become somewhat gelatinous. They are also full of Omega 3s.  I have used them before soaked in fruit juice, but I do have a love of creamy pudding desserts and it's hard to make them without dairy. Chia Pudding is a raw dessert as well as being vegan, gluten free and lactose free.  That makes this the perfect dessert to serve with all your friends with food intolerances.... Besides that, this dessert was wonderful and healthy too! I did find the restaurant recipe and they used brown sugar so I substituted honey as I wanted to make it a little less sweet. And, I changed the proportions of the ingredients a bit and the way it was made as I like chunky bits of banana in it.  It turned out beautifully and was so simple to make.  It was creamy, crunchy and luscious and absolutely delicious!

For Garnish:  1/2 cup of Unsweetened Coconut Flakes toasted in a frying pan until lightly browned and/or fresh banana slices sprinkled with lemon juice so they don't brown

In a large bowl, mash the banana with a fork.  Stir in the Coconut Milk and Honey and whisk to combine.  Add in the pinch of salt and vanilla (if using) and the Chia Seeds.  Stir to combine and chill for 4 hours.  Serve with sliced bananas and Coconut Flakes on top.

As a sweet dessert, this pudding is considered Earthy and the honey, banana and coconut do make it mostly an Earth dish. However, the Chia Seeds add quite a bit of the Water Element and the Vanilla Extract contributes just a bit of the Metal Element.  It would be a great addition to a meal containing mostly Wood and Fire Foods to create balance.