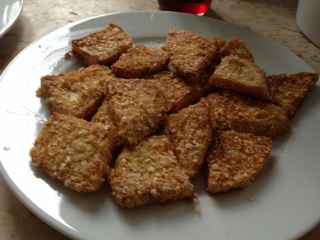 Martin made something entirely new for me that I just had to share with you - celery root cooked up crispy and delectable!  I helped him peel it, he cut it into pieces, dipped it into beaten eggs, dipped them into breadcrumbs and then pan fried them in butter.  This dish was so delicious!  I've had celery root only two ways before - mashed or grated into a salad with mustard in the French style and they are both good. I always like celery root even though it looks like a great, big, gnarly knob.  It's a bit hard to peel and I found that it worked best with a small paring knife instead of a vegetable peeler as I wanted to cut away and the little brown spots.

Celery Root or Celeraic (the official name) or Celery Knob has a very light celery flavor and a crispy texture when raw, but it becomes quite soft when boiled and mashed. But this dish was a complete revelation. It was almost as good as French Fries and those of you who know me, know that is high praise!  The celery root gets slightly softened but is still crisp and the buttery bread crumbs have just the right crunch.  Sprinkled lightly with salt, it is a delightful taste treat!

Cut the celery root into 1/2" slices and then into wedges about 2 inches wide.  Dip into the egg and then into the bread crumbs on both sides.  Place on a clean plate. Heat the frying pan and add the oil and the butter.  When the butter has melted and the mixture is bubbling, stir to combine and place in the breaded celery root carefully.  Cook until golden brown, then turn carefully. Brown the other side completely before removing to a serving plate.  Sprinkle with salt and serve while hot.

Celery root comes from under the ground so you know it has to be an Earth Food. The eggs belong to the Water Element, the wheat bread crumbs are part of the Wood Element, the Butter adds some of the Metal Element as all dairy belongs there (except yogurt). Frying is a Fire cooking method, so that element does have representation, but for balance, you need a bit more.  So, serve this as a side dish to a Fiery food, like a salad with tomatoes or a Fire meat, like lamb to create an even better Five Element balance.