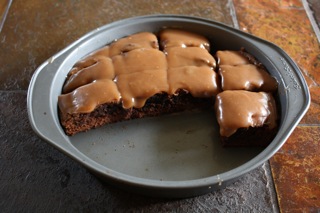 You know those times when you make something that usually turns out wonderfully and perfectly, but all of a sudden it doesn't?  And then, if you hate wasting food like I do, you find an entirely new way of using it?  Well, that's how I came up with this Caramel Sauce for Brownies.  I was in the mood to make some Salted Caramels. I had even visited Michael's to buy some special precut Christmas foil to wrap them in. I've made Caramels dozens of times from an Epicurious recipe and they always turn out perfectly, but this time they simply did not!  I blame this malfunction on an old candy thermometer that just couldn't get the temperature right, but I'm so happy that this recipe didn't turn out the way it was supposed to because I got something else that may be more wonderful instead. But, if you want to make this recipe into candy, just double it and get it to 248 degrees - then cool, cut and wrap in 4" waxed paper pieces. But I loved it just the way it turned out and next time I make it, I think it would make a divine dessert dip for fruit like apples or strawberries.


I love Caramels and sometimes indulge in buying Fran's, which are President Obama's favorite candies, but they cost a lot and Caramels are really simple to make at home.  The only hard part is waiting until they get to the right temperature and if you don't go high enough, they will be too soft as it happened with this recipe.  Being an adaptive person, I discovered another way to use this batch of Caramels that became a thick sauce rather than a candy and I had just baked a batch of brownies.  I am currently very fond of the Betty Crocker Gluten Free brand, which has won a lot of taste tests even over regular brownie mixes and that's what I made. of course you can make your own, but it is one of those things that I never make from scratch.  And, I think that this Caramel Sauce made them the best brownies ever!  You've got to try this recipe if you love Caramels and I think it would be great as a sandwich cookie filling too.

Butter the bottom of an 9x9 inch square baking pan. Bring cream, butter and salt to a boil in a small saucepan, then remove from heat and set aside.

Boil sugar, corn syrup, and water in a large saucepan, stirring until sugar is dissolved. Boil, without stirring and gently swirling the pan, until mixture is a light golden caramel.

Carefully stir in cream mixture - it will bubble up a lot. Then simmer, stirring frequently, until caramel registers 240°F on a candy thermometer. It will take from 10 to 15 minutes. Pour into baking pan and cool 2 hours.  Spread on cooled brownies.

This is clearly an Earth food as it is so sweet, but the cream does add the Metal Element and the Butter contributes a bit of Water. This sauce, when put on top of Brownies gets the addition of more sweetness so it is still a very Earthy food! But, the chocolate in the Brownies brings in the Fire Element and the wheat flour (if using a normal brownie recipe) would make this an almost balanced dessert. Since I was using a mix that was made of rice and tapioca flours, it added more metal and I needed to make sure that I added the Wood Element somewhere else. And if you use this sauce with fruit, you are also adding the Fire Element with apples and strawberries.  This is a wonderful dessert sauce that adds Earth to your meal with its' wonderful creamy and rich sweetness.