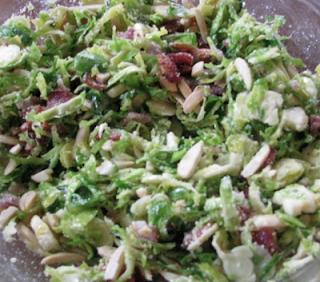 So who would have thought that my Thanksgiving Day experiment would be the favorite dish?  I was recently in Mill Valley and had a lovely Brussels Sprout Salad at Bungalow 44 and wanted to recreate something similar. Now Brussel Sprouts are a traditional vegetable at our Thanksgiving table and we usually cooked them with bacon and onions and they are good. But this year, I decide to slice them very thin instead and tossed them a light lemon vinaigrette and added some crisp cooked bacon.  I then sprinkled in some toasted almonds and Parmesan Cheese. I have to tell you, this salad was great!  None of us could stop eating it. My only suggestion is that Brussel Sprouts seem to do better when you marinate them for a while in the dressing before you put in the rest of the ingredients. And you may not need to use all of the dressing if you want to dress it lightly or you can spoon out the extra dressing after you marinate the Brussel Sprouts and before adding everything else. Something magical happens when you make Brussel Sprouts into a salad. You have to try this one - I think it will surprise you too!

When ready to serve, spoon out the excess dressing at the bottom of the bowl. Add in bacon pieces and almonds and toss. Sprinkle with Parmesan Cheese and serve.

Even though Brussels Sprouts are part of the cabbage family, which is Earthy, they have a lot of Wood Element as well because they grow on large stalks. The Wood Element is further enhanced by the olive oil and lemon juice and the Earth Element is supported by the almonds and bit of sugar. The Water Element is represented by the salty bacon whereas the Parmesan Cheese, shallots and Dijon Mustard contribute the Metal Element.  Only the Fire Element needs enhancing as the small bit of pepper is not enough for balance. So make sure to serve this salad with a Fiery food or beverage, which is quite easy to do as part of a big meal like Thanksgiving!