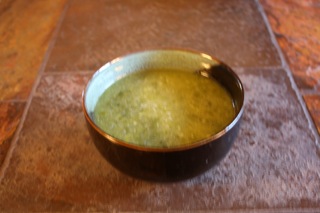 Many of you who have been involved in holistic health may very well already know this recipe as it has been around since Dr. Henry Bieler developed it. He was the author of Food is Your Best Medicine and he was quite controversial in his day, but his ideas agree with the principles of Ancient Chinese Medicine where food was and still is the first and best medicine.  I learned this recipe from Eileen Poole, an amazing nutritionist in LA and it has saved me on more than one occasion.  It is a wonderful detoxifying concoction composed of 5 simple ingredients:  zucchini, celery, green beans, parsley and water.  The amounts can vary and it can be made thicker or thinner.  It increases alkalinity in the body, restores optimal liver function and balances the adrenal glands.  It's also full of potassium and cell salts and helps the pancreas excrete excess sugar. What's not to like about it?  It can be used after overindulgence in food or alcohol or when you are feeling run down. I swear by it and so do many of my friends.  I forget to make it as often as I need to have it.

What does it taste like?  Well, my son when he was little declared that it tasted green and it really does and it grows on you until you get to the place where you relish it because you know how good it is for you. Since I just got back from Bangkok where I ate way too much, I made a big pot (I tripled the recipe) and have been having about 2 cups a day this last week. I find this soup so nourishing that I had to share this recipe even though it is not something I invented. I like to make it on the thin side so I can drink it out of a mug.  Some people like it better very thick.  I know you can add onion and garlic and other vegetables, but this original version from his book is still my favorite.  Once you start drinking it on a regular basis, you will start to notice how much better your skin looks and how much more energy you have. I hope you make this part of your regular diet.  Your body will thank you!

Put the water in a soup pot and add all the vegetables. Water should cover the vegetables (if you push them down by at least one inch). Bring to a boil and cook for 10 minutes or until all the vegetables are soft.  Puree with a stick blender or if using a food processor or a blender, put in 1/2 of the vegetables with about a cup of liquid and puree until slightly chunky.  Serve immediately and refrigerate the remainder. Reheat to serve.

Both celery and green beans belong to the Wood Element so that element is represented.  Zucchini belong to the Earth Element and parsley contributes the Metal Element.  The fact that this is a soup brings in the Water Element so only the Fire Element is missing and having some tea some time in the day is enough to create balance.