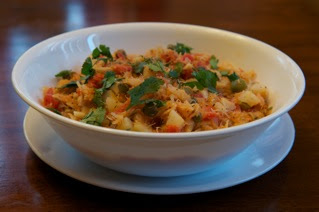 I had all these plans at Christmas to make some traditional Mexican specialties like Tamales and Bacalao (a Salt Cod Salad) both usually served on Christmas Eve and other special occasions - like at Lent as a non-meat dish. Then, I ended up getting ready to move and with all that packing, I had to make things that were a bit simpler. But, I had already gone to Pike Place Market to buy the Salt Cod, which luckily keeps forever since that is why fish is salted in the first place!

I first had Bacalao at my friend Alicia's house. Her mother makes the best I've ever eaten and I wanted to try to replicate it. You have to soak the salt cod for a long time to remove all that salt. Then you cook it briefly to get it to shred and then mix it with a tomato/onion/garlic sauce (that's cooked) along with some pre-cooked potato chunks, some cut up green olives stuffed with pimento, some capers and some almonds for crunch. Some people add pickled jalapenos and pickling juice, but I put some chili in the sauce and like using a bit of lime juice (or lemon juice) instead. Some people also add parsley, but I am partial to Cilantro - but use it mostly as a garnish. The colors of this dish mirror the Mexican flag. I didn't make that much, but this recipe can easily be doubled and while it didn't taste exactly like the one I had in Mexico City, it was still delicious!

Put Salt Cod in a bowl of cold water and leave for at least 8 hours up to 24 hours, changing the water at least 3 - 4 times. When ready, drain the water and put the Salt Cod in a small pot, cover with water, bring to a boil and cook for 5 - 8 minutes or until tender. Drain, cool and shred.

Heat the olive oil in a large frying pan and add in onion and garlic cooking until the onion becomes translucent. Add in the diced tomato and Serrano Chili along with the Bay Leaf and Thyme and cook until the tomatoes start to break down into a sauce - about 10 minutes. Add in the Cod and potatoes and stir it thoroughly to mix in the tomato sauce. Cook until the mixtures starts to become a little dry - about another 5 to 10 minutes. Add in the olives and pimentos, the capers and the almonds. Put in lime juice and toss thoroughly to mix. Set aside and cool to room temperature. Sprinkle with the Cilantro Leaves and fresh ground black pepper. If eating later, Bacalao can be refrigerated and reheated slightly in a frying pan before serving.

Fish belongs to the Water Element and salted fish makes this dish even more Watery. The olive oil, olives, lime juice and capers contribute the Wood Element. The tomatoes, chili and black pepper bring in the Fire Element whereas the almonds and potatoes make sure that the Earth Element has a presence. The Metal Element is represented by the garlic, onions, cilantro, bay leaf and thyme. This is a completely balanced dish!