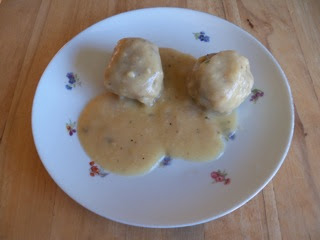 In my quest to master German food, I decided to try to make Knodel. They are German bread dumplings usually served with roasted meat. I have had them at restaurants and they reminded me of American stuffing served at Thanksgiving except they are served as little balls covered in gravy and never see the inside of a turkey. I like their chewy texture and actually the most accurate description of them is that they are probably the precursor for Matzo Balls, only they are made with leftover bread instead of Matzo meal and are therefore a little denser. I made them with leftover Semmel, which are German rolls that to me seem a lot like mini baguettes and these are usually more accurately called Semmel Knodel. I used marjoram as the spice since that is the usual German choice, but I think they would be great with sage or even poultry seasoning as then they would really taste like stuffing and adding celery might be good too. Usually the Germans soften the bread with milk, but I'm not that fond of milk and decided to use broth instead for more flavor, since they were going to be simmered in water.

Like many German recipes I get from my friends - the exact amount isn't always given - instead you get comments like, well it depends on the size of the egg, or you use teaspoons and soup spoons from the drawer to measure and they are not the same as measuring spoons to me. And then there are liters and 1/2 liters and 1/4 liters that on the measuring cups I have seen in Germany have to be estimated. I'm much more used to the exactness of cup measures, I guess. Anyway, the Knodel turned out great on my very first try so I thought I would share the recipe with you. I served them with oven broiled pork chops and made a gravy from the pan drippings (2 cups chicken broth to deglaze the roasting pan. Melt 2 Tablespoons butter in a frying pan, add 4 Tablespoons flour and mix into a paste - add broth and whisk until thickened over medium heat) and a sweet and sour cabbage salad. I think the Germans serve sour things with their meat to help the gallbladder digest the fat. Anyway, these Knodel are not very pretty, but they were a big hit with my son who loves stuffing at Thanksgiving with lots of gravy. So, if you like stuffing and gravy, you may want to give this recipe a try.
Knodel - German Dumplings
1 Tablespoons butter, plus 2 Tablespoons more for sautéing
1 small chopped onion
1 clove garlic, chopped
2 teaspoons marjoram (can also use sage or poultry seasoning)
1 teaspoon or more salt
1/2 pound of stale Baguette bread or Italian bread, cut into ½-inch cubes
1 cup chicken broth
1 egg beaten
¼ - 1/3 cup bread crumbs
Pinch of pepper
In a large skillet, melt the butter over medium heat and sauté the onions and garlic until they are translucent. Stir in marjoram, cook briefly and then set aside to let the mixture cool.
Place the cubed bread in a large bowl. Heat the broth to boiling and pour it over the cubed bread. Set aside for about 15 minutes. When the bread mixture is cool – mash it and then mix in the onion mixture and taste for seasoning – add more salt if necessary and add pepper. Then add in the egg. Add in ¼ cup breadcrumbs and mix well. If the mixture seems too soft to shape into a ball, add more breadcrumbs until it is a stiff dough. The mixture should be firm enough to form into 2 inch balls that hold their shape. Make all dumplings and put on a plate.
Bring a large pot of salted water to a simmer. Lower the dumplings gently into the simmering water and cook for about 9 – 10 minutes.
When they are boiled, remove them and put them into pan with 2 Tablespoons melted butter and cook until they are browned. Serve with roasted meat and gravy on top.
Five Element Analysis

Well, I would never expect someone to just eat Knodel for a meal so these are definitely not balanced by themselves. But the elements in this dish are Wood for the wheat in the bread and the chicken broth. Onions, garlic and marjoram add in the Metal Element. Knodel needs a meat from another element and the pork chops I served add the Water Element and the cabbage salad added the Earth Element. Only the Fire Element needed enhancing and I served tea as the beverage along with sparkling water to gain Five Element balance with this meal.