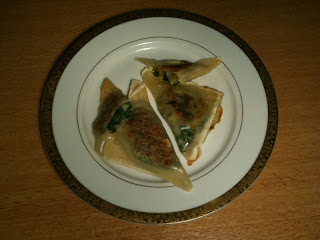 My older son loves ethnic food as much as I do and recently requested that I make Boulani. We used to have these at our Afghani friend's house when he was a child in California and has never forgotten how much he liked them. I liked them too and also appreciated them because it was one of the only ways I got my son to eat spinach! These are usually either made from potato or spinach and use coriander (cilantro) and green onions as flavorings. So, I pulled out the recipe I was once given and decided to make them. However, I put the potatoes and spinach together and liked them even better. I've always thought that they were an interesting variation on Chinese dumplings and Indian Samosas.

Actually, almost every culture wraps things in dough and makes some kind of turnover with the fillings varying depending on the local ingredients. I've always loved eating things with my hands and appreciate small bites of things - "taste treats" as one of my friends calls them. As I had extra potoatos and spinach left over, I decided to use some Indian spices and made a batch of spicy Samosas too. I used Wonton wrappers and made them all small although my friend traditionally used Eggroll wrappers for the Boulani and made bigger ones. Of course, using Wonton wrappers isn't very authentic to Indian cuisine and if you are a purist, you may want to make your own wheat dough. But, I really like the convenience of the premade wrappers and the way they crisp up so well. Both the Boulani and the Samosas would be great appetizers for a party. We couldn't decide which ones we liked better. My son likes to dip things into sauce and he used an Indian chutney as I didn't have any yogurt to make a yogurt sauce (yogurt, garlic, mint and salt). But I like them plain as I so appreciate the taste of the spices. Let me know what you think.

Wash green onions, trim ends and slice into small rounds. Wash and drain spinach. Pick off large stems and chop into small pieces. Wash cilantro and pull of leaves and chop finely. Mix together in a small bowl with spices. Peel potatoes and dice and mix into vegetable mixture.

In frying pan, heat 1 Tablespoon of oil and add vegetable mixture and cook only until spinach wilts slightly. Season to taste with salt and pepper. Remove from heat and let cool.
When filling is cool, lay out a piece of wax paper and place wonton wrapper down like a diamond . Put in about 1heaping teaspoon of filling in one half at the point closest to you. Wet the wrapper all along the edges and fold over to make a triangle. When you have enough for one panful start cooking or wrappers will start to stick to the paper. Repeat.
Heat 1 Tablespoon of oil in frying pan over medium heat and place Boulani in pan and brown on each side. This only takes a few minutes. Remove to Plate covered with a paper towel. Cook the next batch. Serve with dipping sauces of your choice.

Wash spinach and remove stems, chop into smaller pieces. Peel potatoes and cut into small pieces about 1/4 inch. Heat frying pan and add cumin and turmeric and cook stirring until you smell their frangrance and they darken slightly. Add the 2 Tablespoons of butter, onions, chili, ginger and garlic and cook until the onion is soft. Add potatoes and spinach and cook until spinach wilts. Add salt and pepper to taste. Let cool.
When filling is cool, lay out a piece of wax paper and place wonton wrapper down like a diamond . Put in about 1heaping teaspoon of filling in one half at the point closest to you. Wet the wrapper all along the edges and fold over to make a triangle. When you have enough for one panful start cooking or wrappers will start to stick to the paper.
Heat 1 Tablespoon of oil in frying pan. Add enough Samosas to fill pan leaving space to turn them. Brown them a few minutes on each side until they are golden brown. Remove them to a plate covered with a paper towel. Serve with dipping sauces of your choice.

These are snacks or appetizers and not meant to be a full meal, so other dishes should be added to create a Five Element balance. In the Boulani and the Samosas, the potatoes bring in the Earth Element, the spinach adds the Wood Element as does the wheat flour of the wrappers. The Fire Element is represented by the spicy Seranno Chilies and the Metal Element is represented well by all of the spices and the onion and garlic. The only element that is deficient is the Water Element so serving these snacks with some kind of bean dip or eggplant dip would be a wonderful way to create a balanced Five Element spread. And don't forget to serve with tea for more Fire.