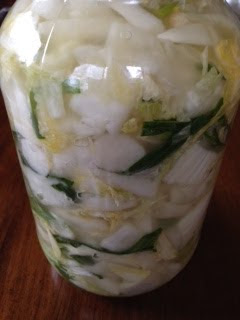 I think everyone is finally getting the idea about how important fermented foods are for your health. Kimchi is one of those foods that enhance the microbiome of the digestive system. This particular version is made without dried Red Pepper, which makes it much easier for those who have trouble with Spicy foods. White Kimchi is very similar to the Pickled Cabbage of Northern China, where my Grandfather comes from and they too like garlic in their Pickles. It is believed that this method of preserving Cabbage came down the Korean Peninsula where it met their fiery red Chili and became the Kimchi that most people recognize. This style is much milder and I personally think it is even more delicious! It gives you a faint fizz on the tongue when you first eat it and it is wonderfully crunchy, juicy and only mildly salty. I think it is the perfect accompaniment for a meal that is heavy on meat. This is my favorite way to add Probiotics to my diet - naturally!

In a large bowl, mix together the 4 Tablespoons of Salt and the 4 cups of Water and put in the Napa Cabbage leaves. Place a plate on top and something heavy (I used my stone Mortar) to weigh it down to keep the cabbage under the brine.  Let sit in a corner of your kitchen counter for 24 hours.

Then, drain and rinse the Napa Cabbage leaves and cut into 1 inch pieces. In the same large bowl, mix together the Salt, Sugar, Fish Sauce and Water until blended. Add in the Napa Cabbage pieces, the Asian Pear, Daikon, Green Onions and Garlic.  Mix together thoroughly and put the plate back on top of the mixture and press down with your heavy object so that all of the vegetables are in the brine and the brine comes over the top of it all. Let the Kimchi sit at room temperature for another 24 hours.

Take the Kimchi out of the bowl and put into a large jar. Pour in brine to cover completely and toss out the extra. Put in the refrigerator for at least one day before eating.

Kimchi because it is fermented and therefore considered sour is part of the Wood Element. However, the Napa Cabbage belongs to the Earth Element, the Fish Sauce and Salt contribute the Water Element and the Garlic Cloves, Asian Pear and Green Onions, as well as the Daikon Radish bring in the Fire Element.  The only element that is missing is the Fire Element, usually present in the Red Chili so it would be a good idea to add some Red Pepper or serve this with some other Fiery food or sauce as part of your meal to create a Five Element balance.