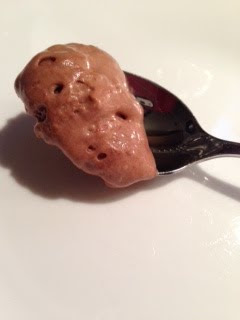 It was Valentine's Day yesterday and I have a confession to make - I don't like really like Chocolate that much, but lots of people I love, love Chocolate. So, I decided to make Chocolate Mousse and I have to admit that it turned out so well that I decided to post the recipe. It was just how I wanted it to be - creamy and airy and with a lovely Chocolate flavor that was just right. It was delicious, although I didn't eat too much as it has cream in it. It was much easier to make than I expected, as long as you have a hand mixer and lots of bowls.  The Chocolate Mousse was really beautiful and so good - especially if you love Chocolate!

I made it the French way, with beaten egg whites although some leave out the eggs or just used the yolks - to me that's more like pudding. The key to this dessert is in the quality of the Chocolate - use good Chocolate! I used 2 Scharfenberger Bars - one Bittersweet Chocolate and one Milk Chocolate, as I wanted this dessert to be on the sweet side. Dark Chocolate is a bit too bitter for Mousse, in my opinion - although I am sure some people would disagree with me.

I used the Mousse recipe of Julia Child, which does not use cream and I didn't use the rum and coffee that she did. I did however, heat the egg yolks with sugar as she did. I mixed her recipe with a recipe from Tyler Florence, who adds Whipped Cream into the Mousse, although I left out the Vanilla Extract, as I like the simplicity of the Chocolate flavor all on it's own. He also uses Cream of Tartar in the Egg Whites, which I know stabilizes them. I did this because I don't have a Copper Mixing Bowl, which works much the same way and I am quite sure Julia Child used a Copper Bowl to make her Meringues! I must buy one soon. I also used Salted Butter, which they both don't, as I think that a hint of Salt brings out the flavor. I served it with little shavings of Chocolate on top and also served it the French way - in a big bowl instead of individual servings. It was a big hit and it is a dessert that looks much harder to make than it is!

For serving: Chocolate Shavings from an extra small bar of Chocolate - I used a cheese slicer to make the shavings.

Find a medium sized pot that one of your bowls will fit on when placed on top. Put one inch of water in the bottom of this pot and bring to a boil, reduce heat to a simmer and put the bowl on top. Put the Chocolate and Butter into the bowl and stir with a wooden spoon until the chocolate and butter are melted and smooth.  Remove from heat and cool while preparing the rest of the ingredients.

Place the Egg Yolks in another bowl that fits on top of the pot and add in 1/4 cup of the sugar. Stir until the yolks get thicker and warm, much like the texture of a Hollandaise Sauce - about 3 minutes. Remove from heat and stir into the Chocolate mixture.

In a separate bowl, beat the Egg Whites until they are foamy. Add the Cream of Tartar and the other 1/4 cup Sugar and whip until stiff peaks form.

In another separate bowl, mix the Cream with 2 Tablespoons of Sugar.  Beat until soft peaks form.

Now, combine the Chocolate Mixture with the Egg Whites, folding it in gently and then fold in the whipped cream until it is all just barely mixed - it is okay to have white streaks. Remove to a glass serving bowl and smooth the top. Cover and chill for several hours before serving.  When ready to serve, sprinkle Chocolate Shavings on top.

This is a sweet Dessert containing Sugar, so of course it is first and foremost an Earth dish. The Chocolate adds in both the Fire Element with Chocolate with a touch of the Earth Element because of the Milk Chocolate. The Eggs contribute the Water Element and the Cream brings in the Metal Element. Only the Wood Element is missing so this is a good Dessert for a meal that contains a Wood main course, like Roast Chicken or one that contains lots of greens.