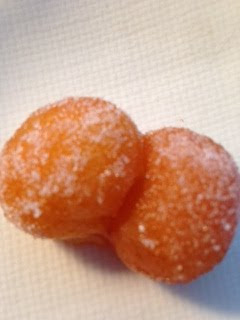 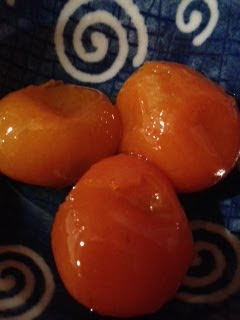 Happy Chinese New Year - this is the 6th Anniversary of 5 Element Food! I have added a Chinese New Year list of lucky foods in Pages that we can all eat for the next two weeks. I didn't cook on New Year's Day for the first time in a long time. I did however make Dumplings and Shanghai Year Cake for New Year's Eve. But on New Year's Day, I had a Grand Opening of the new Lotus Institute Seattle Office/Classroom. I served lots of lucky foods, mostly sweet with a few savory things too but I bought most of them.

One of the lucky foods I meant to make was Candied Kumquats, which I made today instead.  Kumquats are considered lucky because they golden orange color symbolizes Prosperity and a Sweet Life when Candied.  Kumquats are also very good for you! They are full of Vitamin C and the Peel is considered very good for the Heart. Candied Kumquat Syrup is also a classic remedy for colds, coughs and sore throats.

I love Candied Kumquats and this is a very simple recipe that uses only Sugar and Water and if you like, you can also add a Cinnamon Stick or Ginger or Star Anise or all of them to spice it up. I personally like the plainest version as the distinct flavor of Kumquats is enough for me. The delicious syrup can be made into Tea or a Sparkling Drink, used as a glaze for Roast Meat or as a syrup for Pancakes. Candied Kumquats are a beguiling mixture of Bitter, Tart and Sweet Flavors made into a chewy confection. You can serve them moist or lightly dried and rolled in sugar - either way is wonderful! Although you can buy Candied Kumquats at Asian Markets, they are so much better when you make them yourself. Keep some in your refrigerator for this cold and flu season. You don't have to wait until Chinese New Year to make these - they are delicious anytime!

Using a small bamboo skewer or the sharp tip of a small knife, poke holes all over each of the Kumquats. Place in a pot and add sugar and water. Bring to a boil and then lower heat to the lowest heat and simmer for one hour. Kumquats will become translucent and some seeds will have popped out. Let cool.

Then, drain the Kumquats, reserving and straining the syrup. Take each Kumquat and squeeze lightly where you see a large seed inside. If necessary, take the small knife and cut a slightly larger opening to remove the seed.

Return the Kumquats to the Syrup and let marinate overnight before serving so they plump up more or put Kumquats on a wire rack over a baking pan and let dry overnight. Then roll in sugar before serving.

Keep the remaining Syrup in the refrigerator and use for Tea or add to Tea to sweeten it, add to Sparkling Water, use as a Pancake Syrup and as a Glaze for Ham or a Pork Roast.

Kumquats belong to the Wood and Fire Elements because you eat mostly the Peel, which is Fiery as it is bitter, but the inside flesh is quite sour. Candying them brings in the Earth Element and adding any of the spices contributes the Metal Element. While this is clearly not a dish to eat by itself, it does add some strong elements to a Tray of Togetherness that is served at Chinese New Year.