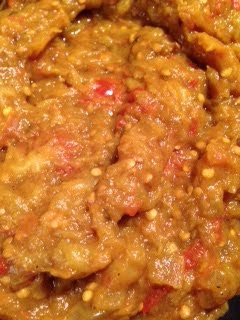 I like Eggplant cooked in many ways and had a version that I particularly liked at a local Indian restaurant. So I decided to recreate Eggplant Bhurta at home. Even though they didn't give me their recipe, my version turned out really well. My only clues were that I could taste the Cumin and I could see the Turmeric. I also knew that as with many Indian dishes I like, it contained a combination of Garlic, Onion and Ginger along with some hot Chili. So, I roasted the Eggplant in the oven and then combined it with those ingredients and served it with Chicken Marinated in Spices (next post) and Saffron Rice. It can be made ahead and I think it tastes even better when the flavors have time to meld. It was delicious and was perfect when mixed with the rice! I think it would be good as a dip or spread on crackers too.


Preheat oven to 450 degrees. Place Eggplant on a baking sheet and cook until it is very soft and the skin begins to blacken - about 30 - 40 minutes. Remove from the oven and let cool. Cut off the stem end and peel away the skin from the flesh. Chop the Eggplant and place in a bowl.


Eggplant is one of the few Water Vegetables so that Element is covered. The Serrano Chili brings in the Fire Element along with the Tomatoes. The various Spices, Onion and Garlic contribute the Metal Element. Ginger, which adds the Metal Element too along with a bit of the Earth Element since it is a rhizome. But the Earth Element is deficient so this dish goes well with Earth foods, like Root Vegetables or Okra or Beef to create a Five Element balance.