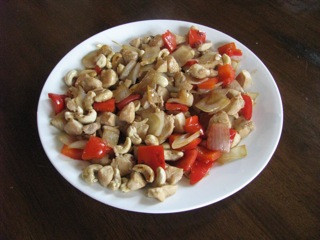 I've been testing recipes for my upcoming Thai cooking class and one of the requested recipes is Cashew Chicken.  I don't usually measure when I cook as that is how I was taught and you learn after a while that dishes should taste a certain way so you adjust as you go.  But, that's not very useful when teaching a class or writing a food blog!  So, when I say I am testing recipes, what I am really doing is using measuring spoons and cups to figure out how much of something I actually use.

Anyway, Cashew Chicken is a big favorite at Thai restaurants, but it is really a Chinese stir-fry dish that the Chinese immigrants in Thailand adapted.  The addition of fish sauce is the biggest difference in ingredients as it is something the Chinese wouldn't use.  This is a super fast dish to prepare as long as you remember to marinate the chicken ahead of time.  I like to marinate it over night for the best flavor, but up until 1/2 hour is also acceptable.  The main flavoring ingredient is actually oyster sauce and for those of you who are scared to use it, oyster sauce is actually one of the main flavoring components in pan fried noodles and many stir fried beef recipes.  It doesn't really taste like oysters, it actually tastes somewhat sweet and you don't use very much.  But, it has such an amazing Umami flavor!  Also, you don't want to use Cashew nuts that are already toasted very much. I buy mine at the Asian grocery store and they are obviously toasted, but very lightly.  I also use a lot of cashews as I really like their texture in this dish. You can make this dish spicy if you like by adding sliced chiles or chili flakes, but I prefer it to just be savory.  You can also add other vegetables if you like such as asparagus and some restaurants put in basil.  I prefer to serve it with another green vegetable on the side.

Marinate the chicken in the Rice Wine and Soy Sauce (or Tamari) overnight or for at least 1/2 hour.  When ready to cook, put the Fish Sauce, Oyster Sauce, hot water, sugar and pepper into a small bowl and mix.

Heat a frying pan or wok.  Toast the cashews until they are lightly browned and remove to a plate.  Then add in oil and onions and cook until translucent.  Add in the garlic and red pepper and stir until onions are lightly browned.  Move the vegetables aside and put in chicken.  Let cook on one side until lightly browned and then turn over.  Let cook a bit longer and then start to stir fry the dish. Pour in the sauce and bring to a boil. Add in the cornstarch mixture and stir until thickened.  Put in cashews and toss to coat.  Serve immediately with rice.

Cashews belong to the Water Element and the Fish Sauce, Soy Sauce and Oyster Sauce bring in even more.  But the Umami flavor of the sauces also contributes some of the Metal Element and the onions, garlic and rice make sure that element is fully represented.  Chicken contributes the Wood Element and Red Pepper adds the Fire Element and so does any chili you might want to add.  I think it would be a more attractive meal if you add something green like basil or asparagus, but what this really needs is a contribution from the Earth Element so I would serve it with some stir fried cabbage to make it balanced.