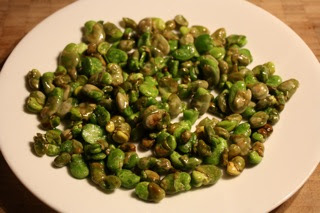 Fava Beans are another food that means Spring to me. My mother and I just love them and my grandfather loved them so much that his nickname at the Original Farmer's Market in LA was Mr. Fava Bean! I guess you can picture how many fava beans I peeled and ate when I was growing up! The best ones are the small ones and you can't really tell easily how big they are when you buy them in the shells.  I look for the narrowest pods that I can find as the little ones are the most tender.

Fava Beans are also called Broad Beans or Horse Beans in other parts of the world and are quite popular in the Mediterranean countries and are even eaten raw dipped in salt. Unfortunately, some people of that region of the world have an allergy to them, but this is one of the foods that I don't have an allergy to - thank goodness! The only difficult thing is that you have to peel them first to get them out of the shell and peel them again (partially) to cook them. You just put your fingernail in the part of the bean that curves inward and pull up so that you remove the top piece where the brown line is where it attached to the outer shell. 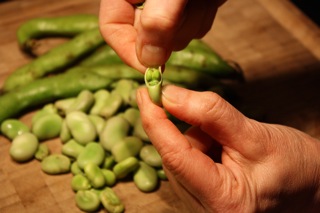 Most recipes from other places call for shelling the Fava Beans and then boiling them for a few minutes so that they are easy to get them out of their second shell shell before using them in dishes, but that was definitely not the way the Lowe family ate them!  My grandfather insisted that we peel just the top off the second shell and assured me that they needed to be cooked within this shell or they would burn, so that's the way I do it. The second shell also tells you when they are done because the beans swell and pop out of that second shell. You don't eat that shell unless you really want to, as it comes out very crispy.  But the Fava Beans will be tender and just a bit caramelized. Instead, you pick out all the tender half beans and enjoy that wonderful flavor that only Fava Beans have....

This is actually one of the simplest recipes I will ever post, but my son asked me to do it so he would remember.  The Fava Beans are just so good with this method, which is a quick saute, that I don't even like to eat them any other way. I used an extra light olive oil as the Chinese don't like oil to have flavors except for Toasted Sesame or Chili.  And then you salt them - that's it. You really should try them this way and you will be amazed at how good they are!

1 pound of Fava Beans, shelled from the pod and the upper part of inner shell removed (see photo)

Heat a frying pan and add in oil and wait until it is hot.  Put in the Fava Beans and cook, stirring often until the shells are crisp and most of the beans have popped out of the shell. Taste a few of the larger ones to see if they are done and if not, cook for a few more minutes.  Sprinkle with salt and serve.

Beans of all kinds belong to the Water Element and the added salt brings in even more, so this is almost completely a Water dish.  However, because the Fava Beans are green and not dried, they are also considered a Wood food as well.  So, serve in a meal with foods of the other 3 elements to create balanced meal.