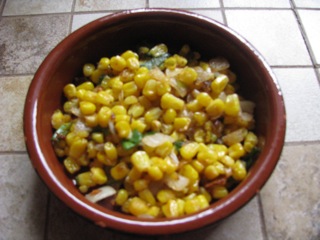 I got a sudden craving for corn today and it's not corn season yet, but I always have frozen corn in the freezer. It is the only vegetable I keep in the freezer besides peas. Of course, frozen corn is not as good as fresh corn, but if you cook it right, it can still be really tasty.  If you decide to make this dish when corn is is in season, make sure you cook the corn cobs first and then take the kernels off to make this dish. But, cooking frozen corn this way makes it so tasty that people don't even realize that it was frozen in the first place.

The idea for cooking corn this way is based on a snack that my sisters and I would make after school when we were kids - we would take frozen corn and put it into the oven on a cookie sheet and cook it until it got dried out - our version of chewy corn nuts and we loved it.  I don't do that anymore, but what I do instead is cook the corn in a skillet with butter along with both green and yellow onions.  By cooking them for different amounts of time, you layer the onion flavor.  And, if you cook the corn and onions until they are browned and caramelized, it has a wonderful flavor.  And if your kids are really opposed to onions, but them in big enough pieces that they can pick them out.  But I've found that this is a great side dish that wins over kids who normally won't eat onions. This was and still is one of my kids' favorites.

Melt butter in a large skillet and add in yellow onions, cook until they soften and become translucent.  Add in corn. Cook, stirring frequently until onions and corn are lightly browned.  Put in green onions and cook until the green pieces are wilted. Season to taste with salt and pepper and serve.

Corn is yellow and sweet so it belongs to the Earth Element,  The onions naturally belong to the Metal Element, but because they become a bit caramelized, they get earthier.  The butter and salt add a tiny bit of the Water Element, but this is clearly a dish that is meant to be part of meal with other foods.  So, if you need to bring in the Earth Element to your meal, this is a good option. To make it a dish that is more balanced by itself, consider adding in chopped tomatoes and ham to bring in some of the Fire Element and the Water Element.  But, you will still be missing the Wood Element so consider serving it with a green leafy vegetable.