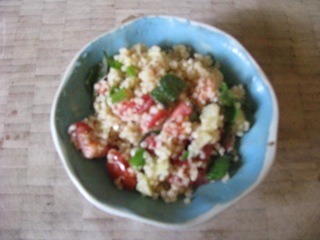 I’ve been working with a lovely apprenticeship student this week. We were discussing the signs of hypoglycemia on the face - a white color on the bridge of the nose between the eyes - and I suggested that eating protein instead of carbs might be a good way of treating that condition. That led to a discussion of high protein foods, besides meat, and one of the foods that fits that bill is Quinoa. Now most people think of it as a grain, but it's not - it's actually a seed. It is actually a member of the Goosefoot family and related to beets and spinach and is grown primarily in the Andes. What's most incredible about this little seed is it's protein content, which is very high at 18%. It also contains lysine, calcium, phosphorus and iron.  Quinoa also has a slightly nutty flavor and I think it is also really fun to eat because it kind of pops in your mouth when you bite into it.  There are also several colors - white, red and black.  Most Quinoa sold in the US has had the Sapponin coating removed, which makes it bitter. So just in case it hasn't been removed, it is always wise to give it a quick rinse before you cook it.  And, Quinoa cooks so fast that it will be ready in as little as 15 minutes.  Sometimes I eat Quinoa with just butter and salt.  It's also a good breakfast with maple syrup and I love making Quinoa Pilaf as well.

But, for this warm and sunny day here in Seattle (yes I know you are surprised), I was in the mood for a salad and I wanted to give my student a taste of Quinoa since she had never had it before, so I made Taboulleh. I cooked the Quinoa in chicken broth to give it more flavor, but if you want to make this dish vegetarian, you can just substitute vegetable broth or even water.  This is a great salad for anyone who can't eat the usual Taboulleh, which is made with Bulgur Wheat. And Quinoa Taboulleh keeps really well and doesn't get soggy, so it's even good the next day if you want to pack it for lunch.  It's really easy to make and very satisfying and it's really good for you too!

Rinse Quinoa in a fine mesh strainer or cheesecloth (the seeds are very small and will slip through most strainer holes).  Put chicken broth in a pot with the Quinoa and bring to a boil.  Reduce heat, cover and cook for 15 minutes.  Fluff with a fork and let cool.

Mix lemon juice, olive oil, garlic, salt, sugar and pepper together in a small bowl.  Taste and adjust seasoning as necessary.  Put aside.

Quinoa is a seed so that makes it a Water Food.  The chicken broth and olive oil contribute the Wood Element.  The Fire Element is represented by the tomatoes, while the Earth Element is brought in by the cucumbers.  The garlic, mint and green onion add the Metal Element  so this ends up being a surprisingly balanced dish!