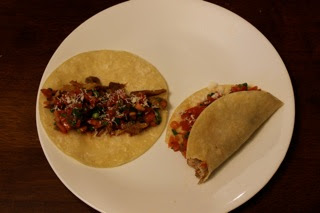 One of the things I crave most when traveling in Europe or Asia is Mexican food. It is one of those hearty, homey cuisines that I can't live without. In fact, the very first time I took a trip to Europe, I really missed salsa for my morning eggs. So, now that I am back home for a while, I get to indulge in my other favorite pastime besides teaching - cooking! And one of my favorite Mexican dishes is Pork Carnitas in soft tacos. Yum!

Now I know that there are several ways of making Carnitas - the most traditional being to cook the pork in its own fat - kind of like a confit and then until it is crisp. But, I don't like all that fat so I simmer the pork in water with onion and garlic, cumin and oregano for several hours until it is tender. I save the broth and some of the meat for Pozole Soup (recipe coming soon). Then I shred the pork and brown it in a frying pan. Served with steamed or lightly browned (my favorite) corn tortillas and fresh salsa, and a little grated cheese, it is just divine. It's really easy to make and great for serving a crowd if you double or even triple the recipe.

8 Corn Tortillas, steamed or lightly browned in a frying pan with a small amount of oil.
Chopped Sweet Onion
1 cup of Cilantro Leaves

Put pork chunks, onions, garlic, oregano and cumin in a large pot. Pour water over to cover pork by about 2 inches. Bring to a boil and then reduce heat to a simmer. Cook for 2 hours and test for tenderness. Pork should shred easily. Cook longer if necessary, but if done, take off the heat and let cool. Take pork out of the broth and shred what you need. Strain and reserve broth and extra pork for later use and store in the refrigerator or freezer.

Heat a large frying pan and add oil. Put in the shredded pork and stir occasionally until pork is crisp. Heat tortillas in a steamer for 5 minutes or in the microwave on a plate covered with a wet paper towel for about 2 - 3 minutes. Or, you can crisp tortillas on one side in another frying pan with a small amount of oil.

Fill tortillas with Carnitas and serve with fresh salsa and top with additional chopped onions and cilantro leaves.

Mix together and let flavors mix for at least 15 minutes before serving.

Pork belongs to the Water Element so that element is covered. Corn tortillas add the Earth Element. The Fire Element is represented by the Tomatoes and Serrano Chile whereas the herbs and spices, onion, garlic and cheese all contribute the Metal Element. Finally the lime juice brings in the Wood Element. To me, it's a balanced meal - all you need is some Cerveza! Or, for me, I like to drink a refreshing Mexican style limeade.