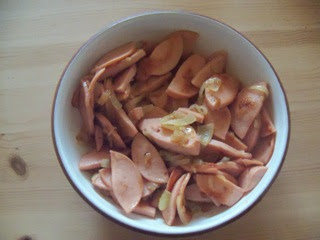 It's funny the things that you crave from your childhood. My mother didn't know what to pack for my school lunches when we moved from Japan to America and so she made things like rice wrapped in seaweed, which I loved, but I got teased about it. So, she went to the neighbors and asked what to make. They recommended ham or bologna sandwiches, potato chips and usually a fruit pie or cookies. She thought bologna was one of the strangest things she had ever seen. And, she refused to put mayonnaise on the sandwiches. Her solution was to make the bologna taste better by browning it in a frying pan. It became my favorite sandwich.

When I had kids and wanted to start packing them lunches, I wanted to give them the healthiest foods possible. What I discovered was that my kids liked pretty much the same things that I did despite my best efforts to give them hummus with carrots. Ranch dressing with carrots was more appreciated, but they still wanted the sandwich and chips. They asked me what I ate at school and then asked me to make that for them. Guess what? The fried bologna sandwich won the day. So, I decided to buy the best quality bologna that I could (is bologna ever really that healthy?) While I could buy Chicken Bologna at the health food store, it simply didn't taste as good as the one from the Polish deli and since my sons' father was half Polish, he insisted that we fry the bologna with onions the way his grandmother did. This became the dinner we made when there was no time for anything fancy and the kids started wanting the browned onions on their sandwich too.

Well, it's been a long time since I've made a fried bologna sandwich and while visiting my son in Singapore, it became a request. Ring bologna wasn't all that hard to find and we had a feast! We both thought it tasted so good.... While I won't serve this too often anymore, it's really wonderful once in a while. Serve this dish with a good, hot mustard - we used Dijon - and it goes wonderfully with toasted Rye Bread. And, then don't forget to serve some vegetables too.

In a large frying pan, heat the oil and add the onions. Cook until they just begin to brown and then add bologna. Cook until bologna and onions are browned. Serve with toasted Rye Bread and mustard.

I would never claim that this is a balanced meal by itself, but it does taste good! The bologna is a cured pork product so it belongs to the Water Element. The browned onions are sweet and caramelized so they represent the Earth Element. Rye bread brings in the Wood Element and the Mustard adds the Metal Element. Only the fire element is missing so my best suggestion is to serve it with a salad to round out the meal and make it a lot more balanced nutritionally.