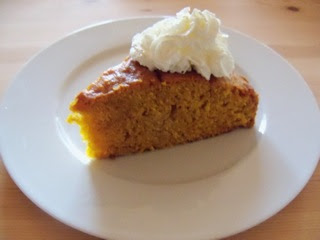 Steamed pumpkin pudding was such a big hit for Thanksgiving with my son's friend that she asked me to make something else with pumpkin. My son told her about Pumpkin Bread, which is the only way he really likes pumpkin. I didn't like the pumpkin we saw at the market, but the Butternut Squash looked really good. Since my son doesn't have an oven, we went over to another friend's house to bake it and since we didn't have a loaf pan, we borrowed a Springform pan. And, since it was clear I was going to be making a cake instead of a bread, I adjusted the amount of liquids. The original recipe comes from Epicurious.com and made two wonderful loaves of Spiced Pumpkin Bread. I also tweaked the spice ratio as I don't like the taste of cloves to be too strong and I love the flavor of cinnamon. I used 1/2 of a small butternut squash that I peeled, cut into chunks and steamed for 15 minutes. Then I mashed it and mixed it in to the rest of the ingredients. One hour later, a delightfully moist cake was ready to be devoured. Topped with whipped cream, it was divine! And, I liked it better than the Pumpkin Bread I used to make. I think the fresh squash gave it a much better taste than canned pumpkin so I will be making it this way from now on!

Turn oven on to 350 degrees and butter a Springform pan thoroughly. In a large bowl, mix together the squash, sugar, eggs and oil. In a separate bowl, mix together the flour, spices, salt, baking powder and baking soda. Then pour the flour mixture into the squash mixture. Stir until just combined and pour into pan. Place in the center of the oven and cook for 1 hour. Test with a knife inserted into the center. If it is clean, take it out and if cake batter sticks, cook for an additional 5 - 10 minutes. Wait 10 minutes, remove the side of the Springform pan and slice into wedges. Serve with sweetened whipped cream.

All squashes belong to the Earth Element and the amount of sugar definitely makes this a mostly Earth food. The eggs and oil add in the Water Element (I used sunflower oil made from sunflower seeds). The wheat flour contributes the Wood Element and the spices and whipped cream bring in the Metal Element. Only the Fire Element is missing. So serve this cake with tea or coffee for a balanced dessert. And, it's perfect for tea time.