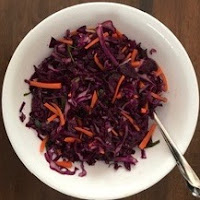 I love serving some kind of Salad along with grilled Meats, but I shy away from ones that are too sweet or too sour. I had a small head of Red Cabbage in my refrigerator that needed to be used and I decided to experiment. What I came up with with is a Red Cabbage Slaw seasoned with Coconut Vinegar and Coconut Aminos. Coconut Vinegar is a bit less sour than many vinegars I use and Coconut Aminos are a substitute for Soy Sauce or Tamari.  The Slaw was so good!  I liked it even better the next day when the Cabbage softens. The flavor was complex and delicious. I will be making this all the time now!

Squeeze out all the moisture from the vegetables with your hands (you can do this in a colander if you want) and put into a salad bowl.

In a small bowl, mix together the Coconut Vinegar, Coconut Aminos, Sugar, Mustard and White Pepper. Stir to combine and pour over the vegetables. Toss to coat. Put into the refrigerator until ready to eat.


Red Cabbage because of its color belongs partially to the Fire Element and partially to the Earth Element. The White Pepper adds a tiny bit more Fire and the Carrot adds even more Earth. The Coconut Vinegar, since it is sour contributes the Wood Element and the Coconut Aminos, since it is salty belongs to the Water Element. The Green Onions and Mustard contribute the Metal Element. Who would have guessed that this little Slaw would be balanced?