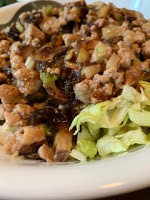 I'm so behind on posting as I have been finishing up the Cookbook - it's gone to layout and now we have to start taking photos. I'm hoping for a fall release date so I will keep you posted. I'm really excited to see it taking shape - my son Stephen and I have been working on it for 3 years!

In the meantime, I have been cooking, as I do most days, but I pretty much cook my old standards, most of which are posted here on this blog. So, I decided to give you a preview of one of the recipes in the cookbook that we have been working on.

I was testing Chicken in Lettuce Wraps, but the Iceberg Lettuce I bought had leaves that were so tightly bound that it wouldn't let me get big enough pieces to make into wraps so I got fed up and chopped it up instead. Deconstructed Chicken in Lettuce Wrap Salad was born. It was so incredibly good that I may never try to make Chicken in Lettuce Wraps again the old fashioned way except maybe for a party and then I would use cute little Butter Lettuce leaves as they are so much better behaved!

This Salad is very easy to make and can be made quickly.  The only downside is that you do have to eat it right away because it is a warm salad. If you feel like taking the time to make them, fried Bean Thread Noodles would make this even better.  Hope you enjoy this as much as I did!

Marinate the Chicken with the Rice Wine and Tamari for at least 15 minutes.

Chop ½ head of Iceberg Lettuce and place in a bowl. Top the Lettuce with the Chicken Mixture and drizzle the thinned Hoisin Sauce over it. Then sprinkle with Pine Nuts. Toss before serving.

Chicken belongs to the Wood Element and Lettuce is part of the Fire Element and the Rice Wine adds just a bit more. The Water Element is represented by the Shitake Mushrooms, Tamari, Sesame Oil and Hoisin Sauce as well as the Pine Nuts.  The Green Onions make sure that the Metal Element is also present and the Ginger, which is partly Metallic adds a bit more, but also contributes the Earth Element. The Water Chestnuts are also a mixed Element food as they grow under Water, which brings in a bit of that Element, but have a brown exterior, which makes them also Earthy and the flavor is a bit sweet so it can be considered mostly Earth. The little bit of Cornstarch adds a tiny amount of more Earth. So, it looks like this Salad is a fairly balanced Five Element dish!
Posted by Lillian at 4:06 PM