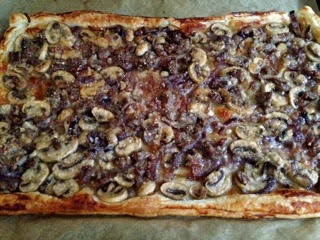 When I first visited New Zealand, I was quite taken by their savory pies and ate them frequently. I am quite sure they came with the immigrants from Cornwall and are a variation of the famous Cornish Pasties - the hand pies that the miners took to work to have for lunch. I particularly liked the steak and mushroom version so I decided to create it as an open-faced savory pastry instead. I had some Puff Pastry lingering in the freezer and some leftover rare roast beef. I combined that with some onions, fresh button mushrooms and made a quick gravy that became a wonderful snack that fed my son and his friend. It was a big hit and I will definitely be making this snack again!

Heat the oven to 375 degrees

Melt butter in a large frying pan.  Add in the onion and cook until wilted. Add in the mushrooms and salt and saute until the mushrooms are soft. Add in the beef and toss to mix.  In a small bowl, stir the cornstarch into the broth and add to the pan. Cook until sauce is thickened. Take off the heat and cool until ready to use.

Spread the puff pastry on a large baking pan.  Roll the edges to form a ridge and then spread the meat mixture over the pastry to the edges.  Put into the oven and cook until the puff pastry is  browned - about 25 minutes.

Beef and mushrooms both belong to the Earth Element so this is fundamentally an Earthy snack.  The onions add some of the Metal Element and the wheat in the Puff Pastry contributes the Wood Element.  The Water and Fire Elements are missing so serve it with some tea or soda and perhaps another Watery snack like hummus and celery sticks to achieve balance. Otherwise, serve those elemental foods at another meal that day.