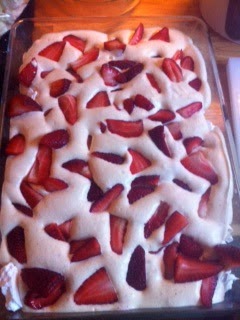 This is a delightful sauce that is like a cross between a Sabayon (or Zabiglione) without any alcohol and a Pavlova. It's also a lot like what's called Eton Mess in England, but the creamy egg sauce is richer and I think a bit more sophisticated. It was served by Martin at my birthday party and I fell in love with it and have been meaning to share it with you ever since. If you want a special dessert sauce for strawberries, you need to try this one. It's fabulous!

Heat sugar until melted and barely caramelized (just turning color) and cool to room temperature.  Put into a large bowl. Then add to the egg yolks and beat until creamy.

Break meringues into bite sized pieces and place at the bottom of serving dish.  Then pour the sauce over.  Drop in Strawberries and serve immediately.

1 tsp. white vinegar
Preheat oven to 350 degrees. Prepare a baking pan with parchment paper.  Put egg whites and salt in a large bowl and whip with a mixer on medium until frothy. Increase the speed to medium-high and beat until whites form stiff peaks.  Gradually add sugar while mixing and then increase the speed to high and beat until egg whites are stiff and shiny. Sprinkle cornstarch and vinegar over the egg whites and then gently fold them in.
Spoon meringue onto the parchment gently and create about a 10-inch circle.  Place in the middle of the oven and reduce the heat to 300 degrees.  Bake for one hour.  Then turn off the oven and leave meringue in until it is completely cooled off – this may take 3 – 4 hours.
Five Element Analysis
Eggs belong to the Water Element so that element is covered as is the Earth Element since this is a sweet dessert. The strawberries bring in the Fire Element and the Cream brings in the Metal Element. Only the Wood Element is missing so be sure to serve this after a meal that includes those kinds of food - like plenty of green vegetables or chicken.