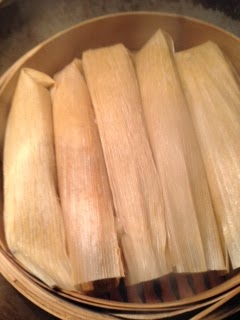 It's time for me to get ready for Christmas and besides baking loads of cookies to give away, I also make Tamales.  I guess this is a side effect of growing up in Southern California, but to me it is an important food of the holidays.  I make them ahead of time and freeze most of them so that I can cook them. Most Mexican people have them for Christmas Eve, but I usually serve them on Christmas Day as my family does a Chinese banquet for that night.

Tamales are pretty easy to make, but they look intimidating.  I think the hardest thing for most people to deal with is the lard (Manteca) that you have to use to make them. I know a lot of people who think that this kind of fat is bad for you, when in fact recent studies show that it is very healthy. It assists in making Vitamin D, is good for the skin, hair and nervous system and is seen in Chinese Medicine as an aid to keeping you warm in the winter. That's why so many Northern European countries include lard in some form as part of their winter food - such as Schmaltz spread on bread. So once you get over your fear of lard, you will realize what a good food it is!

Most of the ingredients for Tamales are readily available in most West Coast grocery stores, but in other places, you may need to find the corn husks and masa online or at Latin grocery stores. I usually make both pork and beef tamales.  They are made the same way and they are both delicious.  If you love tamales, I hope you will try to make them too.

Put pork in a large pot and cover with water.  Add in the onion, garlic clove and Chiles.  Bring to a boil and then reduce to a simmer.  Occasionally skim off the foam that rises.  Cook for one hour and then season to taste with salt.  Continue to cook for 2 more hours.  Remove pork (or beef) and shred when cool enough.  Scoop out the onion, garlic and chiles.  Remove the tops of the chiles and then put them with the garlic and onions into a Cuisinart and puree with a small amount of broth to make a paste.  Add to the shredded pork (or beef) and mix thoroughly.  Sprinkle with 1 teaspoon of cumin if desired. Put pork (or beef) and broth aside until needed.

Put 4 cups of Masa in a stand mixer.  Add in the lard and mix until evenly distributed.  Add in enough broth from the pork to make a smooth paste

Take one corn husk and lay flat with the narrower side closest to you.  Take a ball of Masa about the size of a small tangerine and press on the corn husk, about 2 inches from the top and bottom and at least ½ inch from the sides.  Place about 2 Tablespoons of pork in the center.  Take one side of the corn husk and roll over and tuck just before reaching the other of the masa and continue to roll until a packet is formed.  With the folded edge facing you, fold the narrow bottom of the corn husk toward the center and lay the tamale with the folded side down on a plate.  Repeat until all the masa and pork is used up. If desired, you can use little strips of torn corn husk to tie the tamales.

Place the tamales you want to eat immediately into a steamer basket with the fold side down (I used a Chinese Bamboo Steamer over a wok) and steam for 15 minutes.  Freeze the remainder of the tamales and when ready to eat, steam for an additional 5 – 10 minutes.  Serve with Salsa Ranchero (February 14, 2012 post)

Corn meal is a very Earth food so that element is covered.  However, the pork is a Water Food and the onions and garlic in the cooking broth and also in the salsa along with the Cilantro add in the Metal Element.  The Fire Element is present in the Chiles and the Tomatoes in the Salsa.  The pork and the method of cooking – steaming – also contribute a lot of the Water Element.  The Wood Element only shows up in the lime juice in the salsa but this element needs enhancing so be sure to serve these tamales with another Wood food, like a green vegetable to achieve balance.