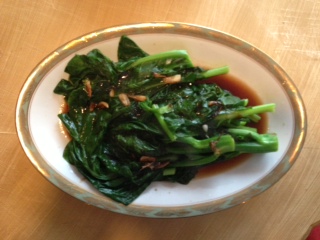 Gailan is a wonderful green vegetable that is often called Chinese Broccoli. It is part of the same Brassica family, but has more leaves, some little flower buds and a stronger, slightly bitter taste. You eat almost all of it so very little goes to waste and it has a very crunchy stalk. I most often ate Gailan at Dim Sum restaurants when I was young, where it was blanched at table side and served with a drizzle of oyster sauce.  So, I decided many years ago to make it just a bit better.  I also blanch the Gailan in boiling water for only three minutes and then I make a sauce of garlic, oyster sauce and chicken broth that I pour on top. My kids loved it and it is served often at my house.  Like all of the vegetables in the Brassica family, it is a nutritional superstar.  It is full of potassium, magnesium and calcium along with many other vitamins. If you like Dim Sum like I do, you've probably tried Gailan. But if you have never made it at home - I encourage you to try making it.  Gailan is wonderful, delicious vegetable!

In a large pot, heat about 4 inches of water until it comes to a boil. Drop in the Gailan and reduce heat and cook for 3 minutes.  Remove from water with tongs and place on a large serving platter.  Then heat a small frying pan with the vegetable oil.  Put in garlic and cook until it just begins to brown.  Stir in Oyster Sauce and Chicken Broth and Black Pepper. Cook until it just begins to boil and then take off heat and pour the sauce over the Gailan. Serve immediately.

Gailan is clearly a Wood Element food as it is leafy and green and the chicken broth adds even more of the Wood Element.  The Oyster Sauce and Tamari bring in the Water Element and the only trace of Fire is the bit of black pepper.  And it is missing the Earth Element. So, serve this dish with foods that contain both Fire and Earth to create a balanced meal.