Cauliflower with Scallions and Ham 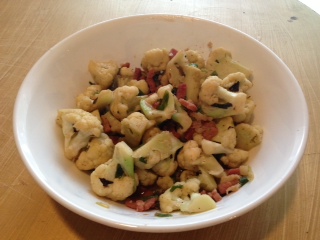 I guess I am on a vegetable kick. I've been craving them and cooking them a lot since I've  gotten home from LA. I realized tonight that I've made this dish many times and never posted it so I am rectifying that oversight. Cauliflower is a favorite vegetable of mine. I like how it can change so easily based on how you cook it. I've mashed it like potatoes and chopped it up to make a salad. I roast it and stir fry it. Cauliflower is another brassica that contains anti cancer properties and in Chinese Medicine, it is said to strengthen the spleen and lubricate the intestines. So like most vegetables, it is really healthy and I want to give you more ways to make it even more delicious.

This dish is an Asian and an American Southern fusion. In China, they eat a lot of ham that tastes a lot like Virginia Ham.  And that's the ham of choice for Chinese cooks in America.  It's a very dry and salty ham and I like it and use it, especially in soups. But a number of years ago, I discovered Country Ham from Tennessee and it is has since become my favorite. It has a softer texture and is also very salty and just has a taste that I can't resist. To be honest, I like it better than bacon. So, I substitute Country Ham in this classic Chinese dish and in almost every other Chinese dish that requires a bit of ham. If you can't find Country Ham, you can replace it with any really salty ham, but I would recommend either using the more traditional Virginia Ham or any unsmoked bacon - even salt pork or pancetta can be used. This dish starts as a simple stir fry that requires some chicken broth to braise steam the cauliflower.  It takes only minutes to make and I've been known to eat only this for lunch because I love it so much.

Cauliflower with Scallions and Ham

Cauliflower is a white vegetable so it belongs to the Metal Element. The green onions/scallions add even more metal so this is a primarily Metal dish. The Country ham brings in the Water Element and the Chicken Broth contributes the Wood Element.  So, serve this dish in a meal that needs more Metal and with other foods that cover the missing Earth and Fire Elements.