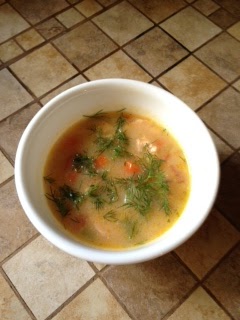 I had some Salmon that my son caught languishing in the freezer that I needed to cook so I decided to try a recipe that I was given by a Russian friend.  However, she told me the recipe in terms of ingredients and not how much of each one so it became a bit of a guessing game.  In Russia, this soup is quite popular and is called Uha. It is served with a good sprinkling of dill and a squeeze of lemon and some hearty rye bread and butter.   Besides the salmon, it has onion or leek, carrots, celery, tomato and potato.  It is seasoned with bay leaves and lots of pepper and the broth is traditionally made with fish bones, but I didn't have any so I used a combination of clam broth and diluted chicken broth and it turned out wonderfully. Apparently, some people use wine and others use cream, but I liked this version so much that I will definitely make it again.  It was really delicious and I recommend that you put lots of dill on it as that made it even better.

In a medium size pot, melt butter and add in the onion, garlic, carrot and celery and cook until the onion is translucent.  Add in the Tomatoes and potatoes along with the stock or broth.  Add the bay leaf and pepper and cook for about 15 - 20 minutes or until the potatoes are tender.  Add in the fish and turn off the heat and leave for 3 - 5 minutes.  Serve with lots of fresh dill and a squeeze of lemon juice.