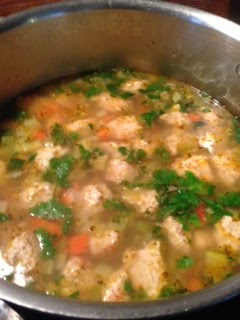 Albondigas is one of my favorite soups and I was craving it. I didn't have any ground beef in the freezer, but I did have chicken. Now, I've never made Albondigas with Chicken Meatballs before, but I actually like it better! This is usually a rustic soup with big chunks of vegetables, but  I like my soup ingredients to fit on a spoon, so I cut up everything a bit smaller and also cut the corn off the cob instead of serving it in big chunks that you have to fish out to eat.  This turned out to be a very light version of the Mexican Classic and it was so delicious!

Bring broth to a boil in a large pot. Turn down to a slow simmer and add in meatballs and corn. Simmer gently for 10 minutes. Remove the corn and cut the kernels off the cob and return to the soup. Add in the onion, garlic, carrots, celery, zucchini, potato and tomato along with the Cumin and Mexican Oregano. Bring back to a boil and then turn down to a simmer. Cook for an additional 20 minutes. Taste and adjust seasoning. Sprinkle with cilantro leaves before serving.

With this many ingredients, you know that there is probably going to be an intrinsic balance. Soup is a water element kind of cooking so that element is covered. Chicken and the broth add the Wood Element along with the celery and cilantro - which is also partly Metallic.  The Fire Element is represented by the Tomato and the Cayenne Pepper.  The zucchini, carrots and potatoes contribute the Earth Element and the rice, onion, garlic, the pungency of the cilantro and the spices bring in the Metal Element.  That proves that this is a very balanced soup and can be a one dish meal all by itself!