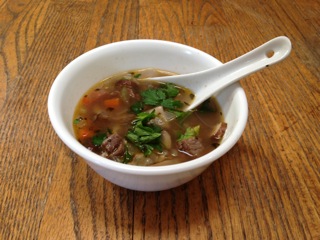 I've been feeling a bit tired and diagnosed myself as being blood deficient again (pale skin and a stronger than usual line on the end of my nose), so I decided it was time for me to eat more beef.  It's one of those foods that works extremely well for me and I wasn't up to eating a rare steak so I made a beef soup instead. Beef does double duty as it is also a very grounding food for me and to make it even more so, I added mushrooms and barley along with the usual trio of carrots, celery and onion. What I got was a really nourishing soup that felt hearty and comforting at the same time. It was really delicious and very easy.  Here's the recipe:

In a large soup pot, melt the butter.  Add in the onions, carrots and celery and onion and cook until the onion becomes translucent.  Put in the additional butter and add in the mushrooms. Cook until all the vegetables are lightly browned.  Pour in the beef broth and add the Pearl Barley.  Bring to a boil and put in the Round Steak, Thyme and Bay Leaf.  Return to a boil and turn down to a simmer.  Cook for one hour.  Taste and season with Salt and Pepper.  Serve in bowls and sprinkle with parsley.

Soup, by its very nature is a Water Food so that element is covered intrinsically. But, beef belongs to the Earth Element and so do the carrots and mushrooms and barley and the long cooked onions, so this is really a very Earthy Soup. The celery adds some Wood and the Thyme, Bay Leaf and parsley contribute the Metal Element, but for balance, be sure to serve some bread alongside to add even more of the Wood Element and you might want to serve a salad to contribute the missing Fire Element or put in some Tabasco to spice it up.