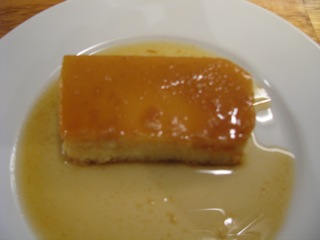 I had a dinner party the other night here in Denmark and wanted to make something different so I cooked Mexican food.  There was a lack of certain ingredients and it was actually fun to recreate dishes with whatever I could find. For example, I ended up using half a packet of Fajita Seasoning Mix combined with pineapple juice to marinate the chicken pieces before roasting them and they turned out great!  The one thing that was easiest to make was the Flan and it was a big hit. Flan is one of my favorite desserts (along with Creme Brulee) and I admit that I do have to take a Lactaid pill in order to eat it, but it is so worth it. It is creamy and smooth and sweet in just the right way. This recipe is a variation of several that I have tried over the years, the most famous of which is the one from Diana Kennedy.  Her recipe calls for 4 extra egg yolks and it does make the flan richer, but I think this way is lighter and I actually prefer it.  I've never had trouble inverting the flan and if you do, just scoop it up and put the flan in dessert glasses and act like you meant it to be that way.  Flan is a lovely end to a big meal.

Put the milk, salt, sugar, and cinnamon or vanilla into a saucepan and bring slowly to a boil, stirring until the sugar has dissolved. Cool slightly.

Beat the eggs and yolks together.  Stir in a small amount of milk and then pour into the milk mixture.  Pour the mixture through a strainer into the glass pan and place it in a hot water bath in the oven. Test after 45 minutes with a sharp knife; if it comes out clean the flan is cooked but the middle should still jiggle. If the knife comes out with too much that sticks, keep cooking for 5 minutes more.  When done, remove from the oven and set aside to cool completely before refrigerating. (It will puff while it bakes and flatten when it cools).

To unmold, carefully slip a butter knife around the rim of the flan and gently under the flan slightly.  Place the serving plate on top of the mold, invert quickly, and turn over.  Cut into wedges or pieces and serve with extra syrup spooned on top.

As a custard, this dish is composed of mostly eggs and milk.  Eggs belong to the Water Element and Milk to the Metal Element so those elements are covered.  And, as a sweet dessert, especially one that has caramelized sugar, you know the Earth Element is involved. What's missing is the Fire and Wood Elements so this is a good dessert to supplement main dishes and vegetables that contain those elements to create balance.  I served it with Mexican Chicken, which is a Wood protein and a Mexican Salad with lettuce that contributed the Fire Element.