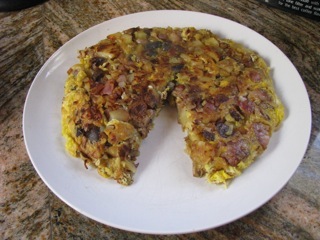 I have a special love for leftovers because they give you so much inspiration to make something new.  The other night I made some roasted red and purple potatoes and I made too many. Since I hate wasting food and I don't usually like recooked potatoes, I had to find the right way to repurpose them. Looking around the fridge, I found 6 eggs and so I grabbed an onion and made a Spanish Tortilla, which is really more like a Fritata. It is not what you make into a taco shell as that is a Mexican Tortilla. Anyway, it's one of the dishes I enjoyed most in the Tapas bars in Spain and I usually ate it lukewarm.  I've made it many  times since. However, I usually use raw potatoes and they take a lot longer to cook and if you decide to start off making this with raw potatoes, cook them first in olive oil and add the onions only when the potatoes are nearly done or the onions will burn. Using already cooked potatoes makes this dish extremely fast. It's a very comforting food and makes a lovely brunch offering or can be part of a light lunch and is especially good when served with a salad - I made a kale one with red peppers.

Heat oil in a 10 inch (non stick) frying pan.  Add the onions and cook until just translucent. Add the potatoes and cook until they brown slightly. Add the chorizo and ham (if using). Pat the potato mixture flat and pour over the egg mixture.  Cook until top is just set. Season with salt and pepper. Using a large plate, invert the pan so that the Tortilla is upside down on the plate. Then slide the Tortilla back into the pan to cook the other side until it is brown. Slide onto a plate and season with salt and pepper again. The Tortilla can cut into wedges and can be served hot or lukewarm.

Potatoes belong to the Earth Element so that element is fully represented. Eggs bring in the Water Element and the ham or sausage would add even more.  The onion adds the Metal Element. For a balanced meal, you need to add a Wood and Fire food, which is why my salad was made with kale and red peppers.