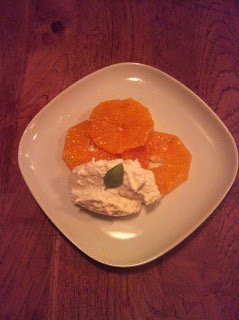 We had a dinner party in Copenhagen and like many times when I shop and cook, I focused on the dinner and completely forgot about dessert! So I found a big bag of oranges and started thinking of ways to serve them. Antonie told me that she likes to eat them with cinnamon sugar as they do in Morocco but she also likes to add a little whipped cream. Adding cream mixed with vanilla to the oranges made it taste like one of my favorite childhood treats - 50/50 bars with vanilla ice cream inside an orange popsicle - except this was even better! I also added a bit of grated orange peel to the whipped cream as it added the Fire Element and made the cream really pretty with small orange flecks in it. This dessert was so popular that we made it again a few nights later! It tasted light, clean, refreshing and vaguely exotic too from the cinnamon. Cut into thin slices and layered, the oranges were also beautiful. Remember to sprinkle the cinnamon sugar on each layer and  marinate it for a while.  I highly recommend  this wonderfully simple and delicious dessert!

Cut oranges by slicing off the top and bottom.  Then using a sharp paring knife, slice off the all of the rind and as much of the white pith as possible, going with the curve of the oranges. Then slice the oranges horizontally into thin slices.  Continue until all oranges are cut.

In a round serving dish, place orange slices in one layer, sprinkle with 1/2 the cinnamon sugar and then put second layer of oranges on top.  Sprinkle with the remaining cinnamon sugar.  Let marinate at room temperature for at least 15 minutes up to one hour.

Mix the whipping cream with the Powdered Sugar, vanilla extract and grated orange rind until soft peaks form.  Chill until ready to use.  To serve, pass to guests so they can add a dollop on top of their spiced oranges.

The flesh of oranges belongs to the Wood family of foods so that element is covered and the rind, being bitter adds the Fire Element. The sugar adds the Earth Element, whereas the cream, vanilla extract and cinnamon contribute the Water Element.  Only the Water Element is missing so this is a good dessert after a meal that is composed primarily of a Water food like fish so that it helps to create balance.