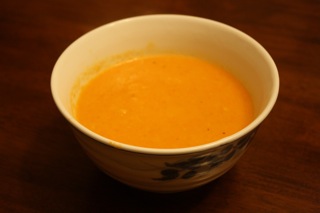 I've been cooking some lately, but I haven't been posting at all. Now that my travel schedule has ended for the year, I will post some of the things I did cook and some of the new things when I cook them - I promise! Last week in Seattle, while I was there for just a few days, it was stormy and bitterly cold and I just couldn't get warm. So, I did what I always do in cold weather - I made soup!  I have to admit that I was also very short on groceries as I hadn't shopped yet after returning from Vancouver.  So, it was time to scrounge in the vegetable bin to find something - frankly I was willing to use anything that could be thrown into a pot with some broth.  I decided to make a Carrot Ginger Soup as I had lots of carrots and used Coconut Milk and Chicken Broth from the cupboard.  I always have ginger on hand as it keeps well for a long time.  I put in a lot of ginger and I would tone that ingredient down if you are not as big a fan as me. But, ginger has a very warming effect on the body as it is very pungent and it is an incredibly good food for digestion. Along with that, carrots are very grounding and soup just makes your spleen and kidneys happy, which is just the organs I needed to help as they were suffering from too much traveling. I added just a bit of sugar because the carrots were not very sweet and I thought the soup needed it. This soup took just minutes to make and I was really pleased about how it turned out.  It was creamy and soothing and nurturing and energizing all at once -  I definitely became warm from the inside out!

Melt butter in a soup pot, add in onion, ginger and carrots and cook until you can start smelling the fragrance of the ginger and the onions are softened. Add in chicken broth and coconut milk. Bring to a boil and reduce to a simmer.  Cook for 20 minutes. Taste for seasoning and add in sugar if necessary and salt and pepper. Take off the heat and use an immersion blender to puree.

As a soup, this is automatically a Water Food, but it is made mostly of carrots and they belong to the Earth family of foods, so that element is covered. Onions, ginger and coconut milk come from the Metal Element so that element is strongly represented too. The broth is made of chicken so that adds just a bit of the Wood Element and that element needs support and the Fire Element is missing except for the tiny amount of pepper. So, to make this a balanced meal, serve it with some Wood and Fire foods.  We served it with a spicy cucumber salad and Chinese onion pancakes to create that balance.