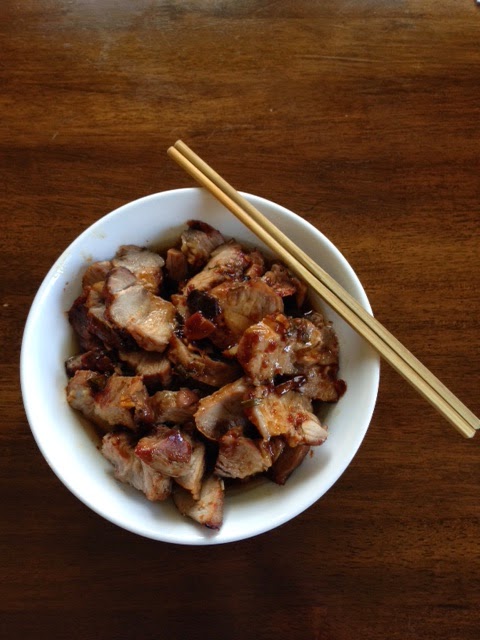 I was at Uwajimaya's the other day - the Northwest's greatest Asian Market - and they were out of Barbecued Pork in the Deli. It is one of my favorite ingredients for stir fry and for fried rice and even for little slivers that liven up my Chinese Chicken Soup.  So, I did what I had to do to give in to that craving - I made some myself.  It's really pretty easy - it just takes a while to marinate and then cook, but it is so delicious when you are done that it is definitely worth the wait!  I made it all in the oven because I don't have a grill so it didn't get as charred as the kind you buy in the Chinese Deli.  I got just a bit of char by putting it under the broiler although a grill really makes it easier. It's also better for you to make your own Char Siu as you don't have to use any food coloring and it still turns out a nice rosy color.  I also didn't have any maltose, which is a classic Chinese ingredient so I used Golden Syrup instead and I thought it turned out great!  If you love Char Siu, you should try this recipe. It didn't last long enough for me to make Char Siu Bao or anything else with it so I will have to make some more soon. My sons ate it in Chinese onion pancakes like a burrito with sauteed green onions and sauteed spinach with hot sauce and I had it over rice, sprinkled with sesame seeds and with the spinach on the side for a delightful meal.

In a small frying pan, heat all the ingredients except the pork until blended and warm.  Place the pork in a baking dish and pour the sauce over.  Rub it into the meat thoroughly and cover with plastic wrap and place in the refrigerator for 4 hours up to overnight.  When ready to cook, heat oven to 375 degrees and cook for 30 minutes, turn over and cook for another 30 minutes.  Then turn on the broiler and cook each side for 5 minutes or until the meat starts to char slightly.  Watch carefully so that it doesn't burn.

Take out of oven and let meat cool for 10 minutes on a serving. Meanwhile, strain the cooking liquid through a fine mesh and place in a pan.  Add the cornstarch and water slurry and heat just until boiling. Then slice the meat into 1/4 slices and pour sauce over. Sprinkle with sesame seeds to serve.

Pork belongs to the Water Element and so does the Tamari, Hoisin Sauce and Sesame Seeds and Sesame Oil.  So this is a mostly Watery food. The garlic and Five Spice Powder bring in the Metal Element and the Earth Element is represented by the Golden Syrup and Honey. Ketchup adds just a bit of the Fire Element so that element needs some support so adding some hot sauce or tea would bring that element.  What's missing completely is the Wood Element so be sure to serve it with some green vegetables to create balance.