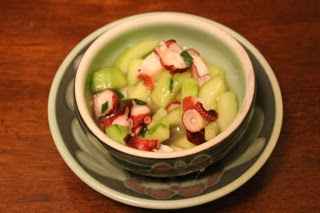 I spent my early years in Japan so when I am stressed, I turn first to Japanese food to calm me down. And, I have been very stressed finishing the second edition of my book and have been staying up too late. The big dark circles under my eyes testifies to that! So, I wanted to feed my kidneys and I believe that the best way to do that is by eating seafood and I love octopus. I don't know why, but I am one of those people who love chewy food and octopus satisfies that need. It is a much underused seafood and I am lucky enough to live very near a fabulous Japanese market, Uwajimaya, which has the best seafood section of any grocery store that I have ever seen. I buy the octopus already cooked and packaged either presliced for sushi or in a small chunk that I can cut up myself. Then I make Sunomono, which is one of the staple salads offered in Japanese restaurants. If you don't like octopus, you can use shrimp instead, but that is something I am unfortunately very allergic to, along with crab and lobster. And, shrimp is also easier to find. Just be sure to either buy cooked shrimp or poach raw, peeled small shrimp to add in.

Sunomono literally means vinegar and refers to a salad with a vinegar dressing, which is made with an acid such as rice vinegar or citrus and soy sauce. I like to add both rice vinegar and a bit of lemon as I think it makes it taste fresher and who doesn't love citrus with seafood? But, you can also substitute bottled Ponzu sauce if you want. It is common to use cucumber, which is also one of my favorite vegetables. Another common ingredient is rehydrated Wakame Seaweed, which gives a lovely dark color contrast and sesame seeds for a garnish. You can also use some minced, dried Nori or you can sprinkle it with Furikake - a mixture of seaweed and sesame seeds with some spice premixed in a bottle that is amazing on rice. I didn't use the seaweed since I also made a seaweed soup (a recipe I will give you another day). It is usually served as part of a larger meal, so you it certainly won't be a fully balanced dish, but it is a wonderfully refreshing salad that is very easy to make at home.

Optional:
Cut octopus into small pieces and put into a bowl. Peel cucumber then slice in half and using a teaspoon, scrape out all the seeds. Then cut each half again and then slice into small chunks. Put cucumbers into the bowl and sprinkle with salt and toss cucumbers and Octopus. Add in dressing ingredients. Sprinkle with sesame seeds and serve.

Octopus or shrimp belongs to the Water Element so that element is covered and the soy sauce, sesame seeds and the Wakame Seaweed enhance that element even more. This salad is very good for your kidneys! The cucumber contributes the Earth Element and the lemon juice and rice vinegar make sure that the Wood Element is covered. The Fire and Metal Elements are not represented unless you use a little of the green onion for garnish, but that is still not enough so be sure to serve this salad in a meal that includes proteins, vegetables or grains that belong to those elements. For example, serving rice will add the Metal Element and tea would contribute the Fire Element.