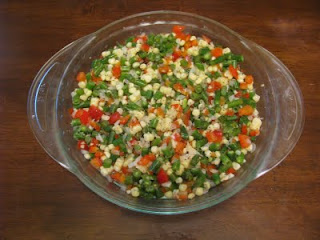 Summer weather has finally arrived in Seattle and I am one of those strange people who prefers it cool. Oh well, it had to happen and most everyone else is overjoyed. But, when it is hot and sunny outside, I simply don't cook very much. For one thing, the fresh produce from the farmer's market is so good that I spend most of my time eating the fruit straight from the bowl or putting together different salads with fresh greens. Today, I looked in my vegetable drawer and found 2 ears of corn, a red pepper and some green beans. Of course, I also had some onions, for if I run out of them, I am in trouble! I cooked the corn and green beans very lightly, but kept the red pepper and onions raw. I tossed them all together with some fresh lemon juice and a little oil and it was delightful! The lemon juice gave it that lovely bright flavor that enhanced the sweetness of the corn. I loved it and so did my son Stephen. I thought about adding some black beans, but didn't have any. And, I debated about tomatoes too, but decided against them in favor of the red pepper as I wanted all the vegetables to have a bit of a crunch. This salad would actually work with other vegetables including cabbage or zucchini. I debated about making it more Mexican in flavor by adding some cilantro, but what I had was wilted. I like to chill my salads a bit before serving, but you can certainly serve it as soon as you dress it. If you leave it too long though, the vegetable will marinate and get softer, but you might like it that way. In any case, it was delicious and it was so easy that I actually hesitated about posting the recipe. But then I realized that the reason I like recipes so much is that they remind me of combinations I haven't used before or for a while. Recipes are for inspiration and you don't need to follow them exactly unless you are baking. So, I hope this one inspires you to make your own version!

Put a large pot of water to boil on the stove and when it comes to a boil, drop in the corn and green beans. Cook for 5 minutes and then drain. Rinse green beans in cold water quickly to keep crisp. Then remove the corn from the cob with a serrated knife. Cut green beans into small pieces a little bit bigger than the corn kernels. Then cut up red pepper and onion about the same size. Put all the vegetables in a serving bowl and add in the lemon juice, oil, salt and pepper. Toss and then refrigerate for at least 1/2 hour to let the flavors meld.

Looking at the different colors, you know this dish is going to have some inherent balance. As my son Stephen says, it looks like the colors of the Mexican flag. The corn represents the Earth Element, whereas green beans belong to the Wood Element and the olive oil and lemon juice enhance this element even more. The red pepper brings in the Fire Element and the onions add Metal. So, the only element missing is the Water Element and that would have been resolved if I had added some black beans to make it a balanced meal. This would also be a great side dish to some grilled fish or pork.
Posted by Lillian at 3:30 PM